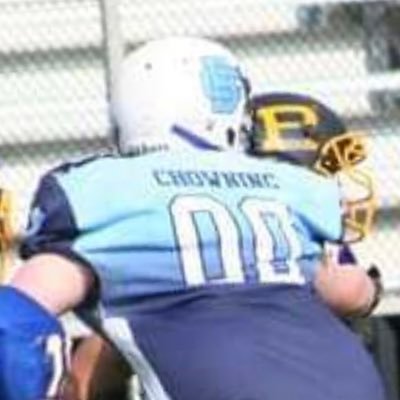 When we first saw that ’26 prospect, Preston Chowning, wears “00” on his jersey; we aren’t going to lie, we wondered if that is even an available number for a lineman particularly on the offensive side of the football. Well, we aren’t sure of the answer even now, but this guy seems to be making it work.

Doing a little research on the matter we have found some precedent for players wearing the number. We have even found an offensive lineman who wore it a very well, we might add.

The number zero was worn in the National Football League but not by a regular player. George Plimpton, a famous sports writer at the time, wore number zero in the preseason when he played quarterback for the Detroit Lions. Jim Otto wore double-zero during most of his career with the Oakland Raiders.

Unlike Plimpton, Jim Otto was a real player. Otto wore the number as a play on his name, “aught-oh.” Wide receiver Ken Burrough of the Houston Oilers also wore “00” during his NFL career in the 1970s.

Otto wasn’t too bad of a player. Matter of fact, he was elected to the Pro Football Hall of Fame in 1980, the first year he was eligible.

In 1999, he was ranked number 78 on The Sporting News’ list of the 100 Greatest Football Players. In 2019, he was revealed as being selected to the National Football League 100th Anniversary Team.

So, there is some precedent for double-zero being worn by an offensive lineman. Matter of fact, it was worn with quite a bit of distinction. It is being revived along the landscape of Northern-Kentucky Middle School football right now.

Preston Chowning has taken up the cause. He has assumed the mantle which comes with the number.

Chowning is listed at 6-1, 221-pounds. He plays “guard” on the offensive side of the line of scrimmage and “tackle” along the defensive line.

He doesn’t come off the field in middle school. Linemen like him rarely do.

We project his likely home in high school is along the O-line interior. We wouldn’t rule out his moving outside in high school depending on how his frame and athletic skill-set finishes.

For now, Chowning moves his feet well and is more nimble and athletic than most young linemen who haven’t yet grown into their ever-changing physiques. Looking at his frame, it appears to us he will get both substantially taller and thicker as he matures.

Boone County is quietly producing and stock-piling some real top-flight talent. Austin Alexander, is a ’25 DL/TE/LB we featured when he won our very prestigious Protein-packed Performer of the Week award underwritten by the MIngua Beef Jerky Company.

We think this is another fine young prospect in the area. We believe, together with the other young talent being cultivated for harvest, there is ample evidence we will see some excellent football forthcoming from Boone County High School’s program over the next 4, or so, seasons.