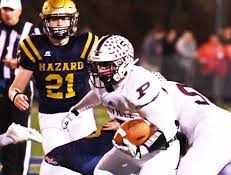 KPGFootball has been pretty effusive in our praise of Coach Chris McNamee’s returning Panther’s prospects in the upcoming season. We have ranked them #1 in our preseason poll, so I would color KPGFootball impressed. Why shouldn’t we be? Pikeville reeled off seven straight wins last season before narrowly falling to Raceland in the State Semi-finals 17-14. As we before told you, in our article selecting the Panthers the top dog in its classification, Pikeville was one of the youngest, if not the very youngest, teams in Kentucky last year, as it only had three seniors on the roster (Wyatt Battaile, Zach Hamilton, and Jacob Wilkerson). If you look at the team’s yardage production, clearly it was a ground-based attack, as Pikeville ran for 2,531 yards, compared with its 1,400 yards gained through the air. Pikeville returns it top three rushers in Zack Roberts (172 carries, 1,285 yards, 12 rushing TDs), QB Connor Roberts (82 carries, 550 yards, 12 rushing TDs), and Jackson Hensley (27 carries, 250 yards, 9 rushing TDs). We want to focus today on the top ground gainer, Zack Roberts.

Zack is a rising senior at Pikeville High School and is 5-9 and weighs in around 190 pounds, which is pretty stocky especially for a running back at the 1A level. The reason he is so stocky is his offseason work which he has done in the weight program. His efforts there been impressive. Now on his recruiting site with NSCA, and who knows how old these number are, his bench press is listed at 260 and he, reportedly, squats 405. For his size and position, these are excellent numbers. His 40 yard dash time is listed at 4.74, plenty fast to play high school running back at the level at which he is playing it (or any other level in Kentucky truthfully). The time appears accurate as his vertical leap is listed at 31 inches which makes both his vertical and squat commensurate with his 40 yard dash time. Roberts, last season, averaged nearly 7 and 1/2 yards every time the football touched his hand. That is remarkable considering everyone in the stadium knew the Panthers were going to run it.

From all of the above, the bottom line is Roberts is a football player. He will ravage district 8 in the 1A classification this year even more severely than last. Look out for the Panthers as they will definitely make a run this Fall. In case the rest of Kentucky is wondering, top level football is played in Pikeville, Kentucky. On that, we are sure.