I am sitting here on May 4, 2018 awaiting Sunday, May 6, 2018 @ 6 p.m. EST, as anxiously as any of you. You see, I know what it means to be a Kentucky Future Star. I know what it meant to me as a father of a Kentucky Future Star and, maybe, though not personally, I know what it meant (and still means) to my own son. The #Brotherhood is about to open its books and add some new names. For those of you lucky enough to make this team, you will be joining a unique fraternity of which you will continue to be proud to belong. Some of you are about to achieve the pinnacle of a young football player’s achievement. Some of you will be disappointed. Perhaps, even should you not make the team this year you will come away more committed to work toward becoming great and more apprised of on what you have to work if you want to play football at that high of a level. A fortunate few of you are about to experience the honor of putting on Kentucky’s blue and white and representing the commonwealth in the oldest and most prestigious of the Future Stars’ contests which occur across the country, the Tennessee-Kentucky game. You need to understand what that means. You shouldn’t pshaw this incredible achievement but appreciate it for what it truly is.

I wrote an article immediately following last year’s Classic. I am re-publishing it here because, in reading it, I hope it will demonstrate what a significant accomplishment being selected to this team really is. The game last year was played on Father’s Day weekend. Getting to watch my son, and the other young men whom had become like sons to me compete in that classic contest left me in the mood to wax eloquently on just what the #Brotherhood has come to mean to both William and Fletcher Long….

I am sitting here on Father’s Day having just gotten the privilege of watching and getting to commentate two wonderfully exciting contests between two teams under the direction of two Directors who feel, to me, as though we are all family. If you will indulge me, and if the editorial board at Kentucky Prep Gridiron won’t mind, I would like to reminisce a little about the three year journey I have gotten to observe my son travel.

I remember, like it was yesterday, my son, as a 6th grader, making the Tennessee Future Stars team. I lived in Clarksville, Tennessee then and, had William not been particularly adept at the shotgun snap, he, undoubtedly, wouldn’t have made the team.  As a sixth grader, William was approximately 5’5″ and weighed around 190. Fairly stocky for that age, but not nearly fast, powerful, explosive, nor anatomically advanced enough to compete with the Tennessee Future Stars who were on that team. Preston Perdue was there, so was Elijah Howard, Toleo Malone was a sixth grader too, David Bailey, Jackson Riley, Don Bubba Johnson and too many others to totally include. They befriended my son and became lifelong friends with whom he still regularly visits. 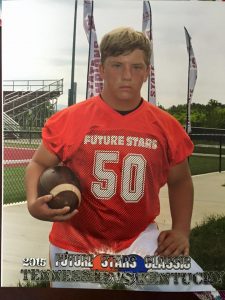 I am so lucky he didn’t quit football that week. He took a pounding and even he would admit he wasn’t physically a match at all with the players across from him in practice or in the game with Kentucky. Yeah, William played three series and had to block Logan Parker when Logan played an inside technique. At the end of the game, I wasn’t upset he only played three series. As a realist, I wondered at how Coach Wampler and his staff were able to get him PT at all. I was also both amazed and thankful Logan Parker and Kentucky’s other D-Linemen didn’t kill or injure him. I wondered for a while whether I had done the wrong thing letting him play. I am glad I did now.

William came back to make the Kentucky team the next year after having played for HMS’ 8th grade team as a 7th grader. It was a different story this time. William played all but three series for Coach Samuels’ 7th grade Kentucky Future Stars team and was a stalwart for that Offensive line. It’s on YouTube, watch it for yourself. William camped at Bowling Green with the Kentucky teammates and made more lifelong friends like LaVell Wright, Austin Gough (William first met Gough, Justice Thompson and Ethan Mills on the FBU Kentucky Team), Isaac Dimmock, Nick Coates, Ben Schofield and too many other teammates to totally include. Kentucky lost the game and William found himself matched up occasionally across from the same Toleo Malone who, like William, had made the Tennessee 7th grade team as a sixth grader the year prior and the friendship bonds just got stronger.

This year, William wanted to play Defense. William is smart enough to know that his future at HHS and, wherever else he may play after, is primarily as an interior Offensive Lineman; but, in his last hoorah, he wanted to play Defense as he had never played a snap of Defense in Future Stars’ games previously. He played hard, well, and with his quick-twitch burst and overpowering strength played well at both 3 and even 5 technique. William even made one of the biggest plays of the game at a time that greatly aided changing the momentum of the game over to the Good Guys.

William was a game Captain and walked out to the center of the field and hugged the neck of the other sixth-grader who began this journey with him three years ago, Toleo Malone. I alluded to it in my article yesterday about the game, but that was a moment for me as a father to William as a father-figure to Toleo, who I love enough to be his father. That was a moment as a coach and friend to both these boys.

I wondered who was this confident, strong, powerful, explosive, and, technically, very sound football player selected a Captain for the Kentucky Future Stars team? I wondered if Toleo Malone and William Long asked the same question about the other, as they walked out to the middle of Fortera Stadium for their embrace?

As I sit here on Father’s Day, I contemplate the gift given both William and me by Tennessee and Kentucky Future Star’s coaches and administrative staffs. I can’t thank Ricco Hughes, Josh Jones, Chris Wampler, Terry Samuels and LaKunta Farmer and their respective staffs enough. What had started a scared sixth grade boy, who undoubtedly wished he might not have made the team, had grown into a formidable and confident player who knew he belonged, who was a star on the team, who his teammates and opponents alike embraced and accepted. What walked out to the middle of that field is exactly what we all had a hand in making. Thank you and Happy Father’s Day to all of you reading this. Not just for the kids you have reared which the Bible gives you charge to rear but the ones you have reared by your own volition. William Long’s trip down this path has concluded, but you will be seeing me again I strongly suspect (and you certainly have).

Until we meet again…keep requiring the young ballers out there to PLAY THROUGH THE WHISTLE!