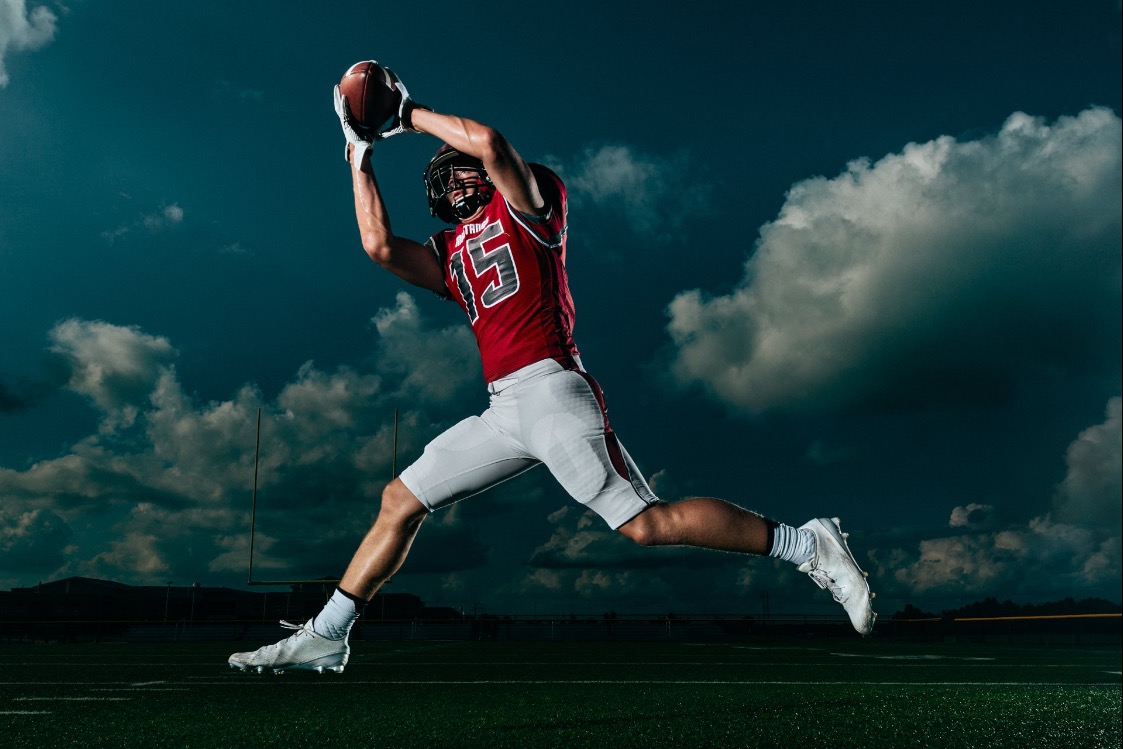 There has been a regime change in Mustang land and, with that, always brings new schemes, philosophy, terminology, and even new deployment of personnel. At 6A McCracken High School in Paducah, Kentucky, Coach Shawn Jackson and his staff have cleared the way for former HHS Head Coach Marc Clark who has brought with him an exciting brand of offense. The Mustangs will both deploy and throw the ball to a TE this year and, for that purpose, have elected to turn to Peyton Cadwell, the previous year’s best Defensive lineman, according to the Defensive Coordinator from Coach Jackson’s staff, to man the job. Peyton matched up against 2nd level defenders attempting to cover him is a definite mismatch capable of being exploited by the deft, offensively minded, Marc Clark.

Peyton is a 6’4″ 222 lb. TE/DE who has been timed at 4.91 in the 40 but 4.39 in the pro shuttle. Now, the 40 time is still good speed, at his size and for his stage of development, but, at the TE position, Kentucky Prep Gridiron assures you the shuttle time of 4.39, and what it means to spacial quickness and change of direction speed, is way more important to next level coaches in evaluating him as a TE. Peyton has the length and frame to add 20-30 more good pounds once he gets to the college strength program and training table. Peyton squats 405 pounds and power cleans 275, with a vertical leap of 32 inches, all indicating he is both powerful and explosive. Peyton is drawing contact and interest from Austin Peay, SIU, SEMO, EKU, among other courtiers who are expressing interest in deploying his talents at their destinations despite not having any film on him at TE to evaluate.

Probably something which will benefit Peyton going forward at the TE position is the fact he has before played QB. The leadership skills required at that position and the call to perform under intense scrutiny and pressure with a world’s worth of expectation are all things which would suggest Peyton should be the number called upon and targeted when the Mustangs face a crucial down and yardage situation.

KPG would note Cadwell isn’t done this year on the defensive side as it is still expected he will get snaps at the DE position at which he has shown such promise and ability and TE’s and DE’s, often times, flip across the line of scrimmage from one level of football to the next. The best example of that is Jason Witten, who came to college a DE, was converted to TE while there, and has become a sure, first-ballot, Hall-of-Famer, NFL TE for the Dallas, Cowboys. Hmm….former DE, converting to TE…sound familiar?

We can’t say for sure Peyton Cadwell is destined to be another Jason Witten, but we can’t say for sure he isn’t either. All we can say is Cadwell certainly has been endowed by God with the tools which lend itself very well to playing the position at which he now finds himself deployed. We expect he will blow up this year and add many other suitors to the ones already showing interest in his continuing his playing career at their destination.