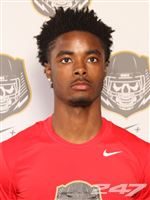 There is a guy I know (and I am not kidding about my knowing him) who was given his first football when he was three and showed an early talent for the game. He grew close to his high school team’s HC and was pushed to work on his passing skill and hit the weight room to add bulk to his skinny frame. Plagued by an offensive line which was suspect in several of the upfront slots, the Coach encouraged this QB to take full advantage of his speed by scrambling out of the pocket and improvising the team’s

offense. This QB flourished under this Coach’s tutelage and the lefty, who was actually right-handed, was considered one of his area’s top high school quarterbacks. Now, the QB I was describing, though he sounds eerily similar to Jalen Johnson, was Michael Vick and you can read more about Vick’s story on the biography.com website (URL:https://www.biography.com/people/michael-vick-241100; A & E Television Network) should you wish, but this article is the Jalen Johnson story.

Simply put, Jalen Johnson is, according to Kentucky Prep Gridiron, the best pure athlete in the Commonwealth’s 2018 Class. Jalen, who is sporting several Division I offers to play basketball in college, in addition to the offers he has to play college football, has grown this offseason to 6’2″ and has filled out his slender frame significantly, weighing in around 170 pounds. Jalen has a 37 inch vertical leap, bench presses over 230 pounds, squats 350, and Deadlifts 415 pounds, which indicates he is fast, powerful, and explosive. With the emergence of Jay Bland (Class of 2020) at QB, Jalen has been getting some summer looks at WR and FS and the early returns are off the charts. Jalen has shown the top end speed and explosion to blow the top off defensive backfields and the hands to reel in some highlight worthy snags during 7 on 7. I am really unsure at what position he projects in college as he is only 12 TD passes short of the career TD mark at HHS and 2,200 yards short of eclipsing Deontay Kenner’s career passing yards mark. From what I have seen of his work this offseason at receiver however, in the mind of  KPG, Johnson is easily in the top three receivers in the Commonwealth’s 2018 class; if he isn’t the very best. With a 3.5 GPA and a qualifying ACT, the Clearinghouse application is a mere formality.

Probably the best thing I can say about Jalen Johnson as a football player is he makes everyone around him a better. With him under Center the past two seasons, Jalen has lead the Tigers to back-to-back 10-2 seasons; just like he has lead the basketball team to two of the past three Regional Crowns. The ability to lead and inspire, being intangible qualities necessary at the QB position are

where the Jalen Johnson types really shine. I simply can’t ignore the fact, however, that, while Jalen is considered on the short side of Division I QB’s, he’s a tall WR, so many of his physical attributes which are negatives at one position are positives at the other.

The fact Jalen has played the QB position so extremely well serves him well at WR too as Bland, should he play QB, knows, not only does Johnson know the routes and offense, but Johnson is the last WR who will fail to focus and catch the tough balls for Bland in traffic. No one realizes a young QB needs a WR to go out and make plays for him better than Johnson! The University of Tennessee took a tremendous HS QB in Juan Jennings and made him a college WR and Jennings is touted by many as possibly the best WR in the SEC today. Like Johnson, Jennings knows all too well the QB needs him to go get the ball for him, like Jennings did at the end of last season’s Georgia game. I am easily able to foresee a circumstance where Jalen Johnson turns into a FBS, Power 5 conference level, WR in college as he has the height, length, quickness and speed coaches on the next level seek.

Regardless of at what position Jalen plays going forward,  KPG believes Jalen Johnson is the best athlete in Kentucky’s 2018 High School prospect class. If you will go back to the premise which comprised the title of this article put us down for a Yes response and it is a response to that question we make emphatically. What is even more refreshing about Johnson is he may also be one of the hardest working, inspiring, and well-spoken too, which speaks volumes about his family and parents. Remember ballers…PLAY THROUGH THE WHISTLE!