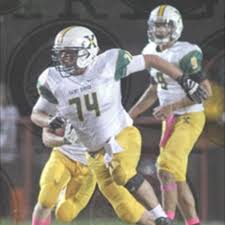 No, the title isn’t a misprint. Last year, according to 247Sports.com, St. Xavier…compiled over 3,000 yards on the ground and found the end zone on 40 occasions as the Tigers went 10-4 and made a deep run in the Class 6A state playoffs before losing to powerhouse Trinity in the semifinals 24-14. Instrumental in that effort was the anchor of the offensive front paving the way for those 3,000 ground yards and 40 rushing TDs, Wyatt Smock.

Wyatt Smock is a 6’4″ 290 pound offensive lineman in the 2018 Class who the Commodores like at either Tackle or Guard, feeling him to have the versatility to play anywhere along the offensive front. Smock, defensively for Saint Xavier, played some Nose, mostly on goal line and late down, short yardage

situations, but it is the opinion of Kentucky Prep Gridiron, and virtually every other analyst around the country, that Smock will play along the offensive line at Vanderbilt. From watching his film, it is evident he has trapping and pulling pretty down pat as there is highlight upon highlight of him either ripping and clearing for the long pull or effectively and deftly making a flat step and trapping unsuspecting, and exceedingly unlucky, interior D-Linemen finding themselves unfortunate enough to get in his path.

When asked by Vandy247 about why he selected the Commodores over the likes of hometown Louisville, Purdue, Wake Forrest, Arkansas and others, Smock said It was the best decision for me, I didn’t want to stay in Louisville, and I always wanted to play in the SEC. It certainly bears mention Smock’s position coach at Louisville Saint Xavier is former Vandy offensive lineman, and three-time NFL Pro Bowler, Will Wolford. There is a great possibility that didn’t damper Vandy’s chances the least bit.

Smock has been described as a strong and agile drive blocker who probably needs some work on his pass protection which, really isn’t his fault, as Saint Xavier is too busy beating people up on the ground to worry about whether it needs to utilize the forward pass. Smock is listed as the 44th best Offensive Guard in the Country according to the 247Sports.com composite rating service and in this observer’s opinion, is just another example of the difficulty in analyzing linemen. If Smock were a skill, and as good at that as he is at O-line, he would be rated much higher. To me, the fact that both Bret Bielema at Arkansas and Derick Mason at Vanderbilt both offered him, and really wanted him, is all I really need to know as both programs have consistently taken linemen not as ballyhooed as some and made them All-Conference caliber, showing the ability to both asses, and then develop, Bigs.

A few years back Vanderbilt took a very raw but talented lineman out of Clarksville High School who reminds me very much of Wyatt Smock, named Bruno Reagan, who I believe now to be among the SEC’s best interior O-linemen. Mason will do the same with Smock in the opinion of Kentucky Prep Gridiron. Mason has the track record of doing it and Smock has the talent and frame to have it done to and for him.