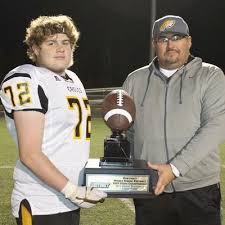 I hear they call Paintsville, Kentucky the Oasis in the Mountains. An oasis is generally described as a fertile spot in a desert where water is found. When it comes to mining for football talent, the mountains of Kentucky are hardly a desert. There is talent in football all over the mountains, especially in Paintsville. Ask the Johnson Central High School football team which won the class 4A State Football Championship in 2016 and played for it last year. Or, ask the coaching staff at Johnson County Middle School which won the Division I, Middle School Football State Championship last year over a North Pulaski team we had, in our preseason middle school poll, picked to finish second in the commonwealth, which they did. JCMS publishes that one of its goals is to encourage all students to develop and display a reverence for achievement. Whether players, like Owen LeMaster, at JCMS revere achievement or not, I can’t tell you. What I can tell you is that JCMS, Owen LeMaster, and the rest of the Eagles certainly achieve. When we interviewed North’s coach G.J. Wooldridge for this article he told us…they won by six points over us and ran 57 offensive plays to our 22-24, somewhere in there. I would say they controlled the line of scrimmage. Controlling the line of scrimmage is how teams win football championships and Tennessee-Kentucky Future Stars Classics.

I can give you four words for why Johnson Central Middle School bullied its way to to a State Championship last season and why the football fortunes at Johnson Central High School are always so rosy. Players like Owen LeMaster. LeMaster plays on both sides of the ball, at offensive guard and defensive tackle, for JCMS. However, Team Kentucky Future Stars platoons. There is just too much talent on the roster to play both ways. We here at KPG Football believe he will play at offensive guard opposite of Hopkinsville’s William Hughes when the dust settles. Should that personnel deployment occur, as we predict, that would give Team Kentucky a pair of All-Americans flanking its center. Hughes, at 5-10 and 260 pounds, as before reported, is a Bret Cooper Junior All-American and LeMaster, at 6-0 and 240 pounds, is, along with Jacoby Thornsbury, one of the more decorated football players on the Kentucky’s class of 2022 roster. Owen is a Diamond Sports and a National Undergraduate Combine All-American to go along with numerous appearances on Team Kentucky’s FBU team and Team Kentucky Future Stars.

Now I would like to add an anecdote to today’s story. When my preseason poll, which is above linked, was released last year, I didn’t have Johnson County ranked in the top-20. The head man called me up and told me I was wrong and he would prove to me my error as the season unfolded. He told me, preseason, they would either win it all or play for it. Looking back on the conversation, if I had a front line with middle school players the ilk of Owen LeMaster, and a team with the discipline and ability to pound the ground like JCMS did last year, I would be confident too, so I am not knocking him. I guess I never got to say I was wrong, at least not to him. So, Owen, tell coach I stand corrected. I was wrong!

Now that that is out of the way, go out there and whip Tennessee’s butt. With players up front like LeMaster, that is as good of assurance it can happen as one can expect.