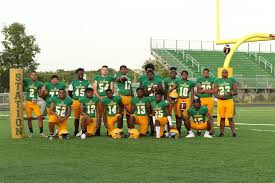 Brayden Dunn (2022) for Mercer County had 11 carries for 170-yards and 3 TDs in Mercer’s big win against Anderson County Farmer’s National Bank Game. Bryce Walton (2021) studded out in contributing 14-tackles, 3-for loss, and a sack defensively for Mercer County which ran its final regular season tally to 6-1 entering the playoffs.

Jack Gohmann (2022) for Lexington Catholic completed 16 of 27-passing attempts for 180-yards and 4-passing TDs in what was one of the more shocking upsets of the year in defeating Covington Catholic.

Joseph Bond (2022) carried it 15-times for 206-yards from scrimmage and 4-rushing TDs. Bond, over the course of the year, has averaged 122-rushing yards per contest playing a tough 6A schedule and has 1,098-yards gained from scrimmage on 131-carries with 11-rushing TDs over his 9-games played.

On Bond’s watch, Bryan Station is 8-1 with wins over Tates Creek, Henry Clay, George Rogers Clark, and Simon Kenton, all traditional 6A powers. The 7-6 narrow loss to Scott County, to open action on September 11, would prove to be its lone blemish on a very impressive 8-1 regular season campaign.

That is quite the turn-around for a program which was an uninspired 3-8 in 2019. What a tremendous job turned in this year by first-year, head man, Phil Hawkins who came over this past summer from a previous stint as head football coach at Owensboro Apollo.

Of course, Bond certainly wasn’t alone in turning in a noteworthy performance this past Friday night. Teammates, Mikaleb Coffey (QB/Ath 2021) and Giovanni Watson G/DT (2021, pictured to the right) pitched in mightily for the win.

Coffey was 16 of 20 for 192-yards, 3-TDs with a pick while rushing it 3-times for 31 yards in Bryan Station’s big win over Simon Kenton. Watson was defensively lethal with his 10-tackles, contributing 2-TFLs just for good measure.

Fulton County (1-6) has had a tough year, or has scheduled a bit ambitiously, however you want to look at it we suppose. However, the defensive triumvirate of Brock Bridges (DE, 2021), Dylan Hammond (DE, 2021), and Tyler Love (DT,2021). Friday night was no different. Bridges had 6-tackles, 1 TFL, and a QB-sack while Hammond had 10-tackles and a TFL. In between the two bookends, Tyler Love led the team with 12-tackles and a TFL. Now that is a front getting it done. Unfortunately, Fulton County dropped the game to Class 5A, District 1 Muhlenberg County (2-5), 27-14.

A subscriber to the site brought an omission to the magazine’s attention from last week’s Outstanding Performances article. We completely missed the game Ryan Rayno, (2023, RB) had in Logan County’s win over District foe, Hopkins County Central.

Rayno (pictured to the above right) accounted for 4-TDs in the win, 3-rushing, 1-receiving (48-yarder) to lead his team to the 42-16 conquest. We didn’t have this information when we authored last week’s piece either because the team hadn’t yet posted its statistics or we just missed it. Either way, we regret the omission.

Congratulations Ryan for that remarkable output in the “scoring column” and thanks to the subscriber bringing our attention to it. It takes teamwork for the dream to wo