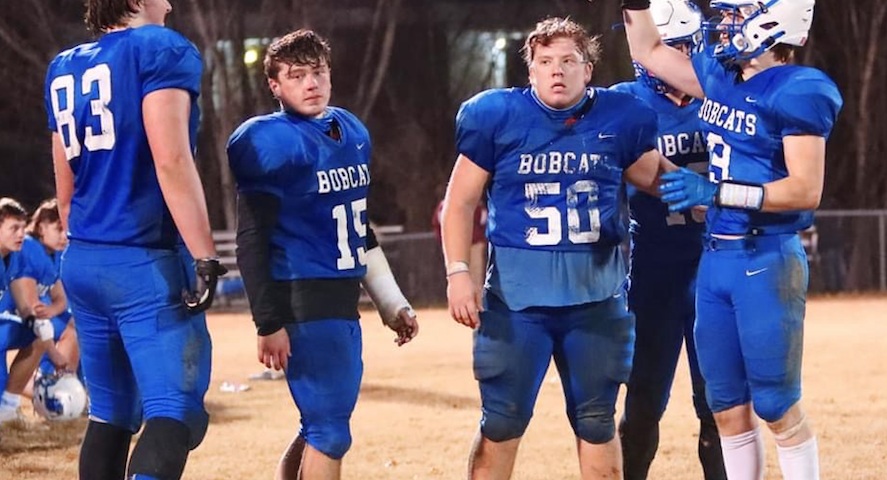 It was win or go home, Friday night in round-two and we were handing out District hardware at the end of these games. Playoff performances make more of an impression on us at the magazine than regular season production.

Lane Weddle (2021), who has been referred to as the Forrest Gump of Kentucky High school football, a nickname which honors the many ways he impacts a football game, turned in another impressive performance for the Breathitt Bobcats this past Friday night in the District 7 Championship game. Weddle had 23 carries for 222 yards, 3 rushing TDs, 2 receptions for 26-yards, an interception, and converted 5 of his 6 PATs.

While all of this is breath-taking, it fails to fully encapsulate how many ways Weddle impacted Friday night’s game with Leslie County. In addition to all of the above, we would like to talk about one of his kick-offs in the second-half which may have put the game out of the Eagle’s reach.

With the game very much still in contention, former writer for KPGFootball, member of KPGFootball’s editorial board, in his capacity as the Editor-in-chief for the Jackson Times-Voice‘s digital and print newspapers, Fletcher Long, wrote the following about that kickoff…

“Weddle’s best play of the night probably went unnoticed by the casual fan. Remember his back-spinning, arching, sand-wedge of a kickoff which hit a foot from the in-line and sucked back onto the field of play like a perfectly scotched short-iron at Amen Corner? Remember, it was the football, riddled with English, which couldn’t be handled and resulted in a Breathitt possession deep in Leslie territory. The possession (netted from Leslie’s inability to handle that football)…would see the end zone and end…Leslie’s plucky upset bid?” Long, Fletcher; Breathitt, Kings of District 7; link; Jackson Times-Voice (Nolan Paper Group).

Well said, Mr. Long. That Weddle sure is valuable to a high school football team, wouldn’t you agree?

Former winner, William Long (2021), turned in another fine performance on both sides of the line of scrimmage for his Breathitt Bobcats. At his interior DL post, where he was triple-teamed pretty much every snap Friday night, he turned in 5-tackles, 1-QB-sack, 2-TFLs, and a FF.

Offensively, Long captained an OL which paved the way for 303-yards of rushing on 41-carries and 5-rushing TDs. Breathitt’s famed Big Blue Wave has begun to assert itself in recent weeks.

What a night for Hazard! The team which began the year 0-5, righted the ship and then pulled off the most impractical upset over the classification’s defending state champion, Pikeville High School.

Garrett Miller (2021) completed 11 of his 14-passing attempts for 143-yards and a TD. Max Johnson (2023) gained 107-yards in 23-carries with a rushing TD to go with his leading the team defensively with 9-stops. Oh yeah, Johnson also intercepted 2-passes for 57-return yards including the pick-six which iced the game. Hazard won 21-12.

Braden Mundy (2022) had a huge game for Owensboro Catholic as it upset its district’s top seed, Hancock County, 27-26. Mundy completed 7 of his 12 passing attempts for 86-yards and a TD. However, it was with his feet he did the most damage. Mundy carried the ball 16-times for 228-yards with 2-rushing TDs. Did we mention his interception? Well he had one of those too.

Wow, what a night senior QB, Orry Perry (2021), had in round two against Shelby Valley. This night gets filed under “Are you freaking kidding me?”

Perry completed 16 of his 24-passing attempts for 212-yards passing with 4-TDs, against not a single pick. His buddy and backfield mate, Leetavious Cline (2021) had a night (again). Cline carried the ball 22-times for 176-yards with a rushing TD. West Carter beat Shelby Valley 48-18.

Johnson Central is just the best football team in the 4A-classification and it doesn’t appear close. Dylan Preston (2021) may be the team’s top statistical performer. He may be the team’s best player too but that is unfair to say, as there are fine players on that roster who don’t have the opportunity to factor, statistically, as much as a guy who plays the positions played by Preston.

Against Letcher Central, who Johnson Central made look much worse than they actually were (Eagles won 50-0), Preston carried the football 13-times for 211-yards with 3-rushing TDs. Credit the front for Johnson Central which boasts talent like All-staters Grant Bingham (2021) and Owen LeMaster (2022) together with dependable and tough OG, Cameron Willis (2021).

Frederick Douglass had some big-time performances this week in beating Scott County 39-21 at its place. RB, Darius Neal (2021) showed why he’s an elite performer in his graduating class. He carried the football 22-times for 165-yards with 3-rushing TDs, which complemented his TD-receiving perfectly for his scoring 4 on the night. Dekel Crowdus (2021), a UK commitment and and a favorite around the magazine, caught 6-passes for 100 receiving yards with a score. QB, Samuel Cornett (2022) was 12-16 passing for 241-yards with 3-TDs against no picks.

Trinity’s Nathan McElroy (2021) had a big game at QB for the team largely considered Kentucky’s finest at any classification. McElroy completed 10 of his 16-passing attempts for 207-yards passing with 4-TDs. Brandon Stearman (2021) paced the defense with 5-tackles, 1.5-TFLs, and 1.5 QB-sacks. Teammate, Michael Patterson (2021) only had 3-stops, but two of them were QB-sacks. Alton Jefferson (2021) pitched in 1.5 in the sack department. Trinity sacked Eastern’s QB a whopping 8.5 times. Trinity won 49-7 and will host Dixie Heights for the Region.