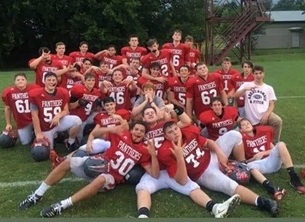 We are big believers in “accountability” around the magazine and we don’t like to just throw out some crap and leave it in the rear-view without going back and looking at our results. We believe is working toward perfection just like is demanded of the kids who play this game.

These were five games we felt would turn out differently in round 2 than during the season. We went 5-0, though in one of the games, McCracken over Henderson County, the game was decided by COVID-19. We will call that a scratch.

For the remaining four games we will remind you what we said in the prior article and then detail what the final score was. We strive for perfection around KPGFootball. We weren’t perfect, in that some of these games had margins we didn’t foresee, but we still got them all right.

Hey, that’s why you pay us! The below is the accounting of our performance.

Regular season: October 23, Raceland won at home 23-20. Really could see this one going either way. Both programs have made deep runs in the playoffs before and both are considered elite programs at the classification of play. Last time out, Jacob Heighton for Raceland threw a TD pass but also threw 3-picks. Paintsville also won the ground game, but it was close (Paintsville 165-yards rushing to Raceland’s 145). We believe the two FG kickers, Peyton Ison (Raceland) and Braydon Combs (Paintsville) may factor prominently here. That may come by the way of made or missed field goals or it may come in the way of converted versus missed PATs.

Regular season: October 16, Hancock won in Owensboro 30-29. Last time out, this game was anyone’s and the final score reflected that. If Lincoln Clancy can make better decisions with the football (2-picks last time out) and if the Aces can get the running game uncorked while defending against the run much more effectively (rushed for 83-yards while allowing 300) this outcome should turn around significantly. If you look at the turnover margin and run differential, it is hard to believe the two teams were only one-point apart on the scoreboard last time the game was played. There is something to be said about, “having been there before” and O. Cath. is the team which has been there many more times than Hancock County.

Score: Owensboro Catholic won 27-26, not the margin we thought but hey, a win is a win!

Regular season: October 16, Logan won in Russellville 31-7. Pretty easy to see where Hopkinsville went wrong in the meeting the 16th in Russellville. QB, Trey Jefferson had a tough night completing 5 of 22 passing attempts for 72-yards with 3-interceptions. Superstar, All-Stater and “Mr. Football” candidate, Reece Jesse, Jr. had 2 receptions for 24-yards. The most glaring stat, which sort of jumps out at you, is the 410-yards of rushing the Tiger defense allowed that night while rushing for only 41. If they have that type of disproportion again, then Hopkinsville is beat, right now. Hopkinsville has resurged late in the year with changing up the offense to more of a quick-strike, play action game and Jayden Dillard (RB, 2022) is beginning to run more down-hill. We believe this game will be different.

Score: Hopkinsville pasted them 42-20. What did we say about a win being a win?

Regular Season: October 2, South Warren won at BG 10-7. Javeius Bunton was held to 77 yards rushing on 22-carries and a lone TD when the teams last met and FBS, Power 5 prospect, Jordan Dingle, caught an uninspiring 3-passes for 49-receiving yards. Both of these prime-time Purples will have to show up Friday night if the result is expected to be different this second time around. This is an interesting matchup largely owing to the fact both teams regularly play and compete in the same city. Both of these teams are historically among the best teams at this level of play and both coaching staffs “have been here before” many, many times. Both teams have Division-I college talent dotting the roster and wearing their respective colors. If one could pick a second round game to attend, this is the one we might recommend. This game will turn on which of the two, evenly matched teams makes the fewest mistakes.

This time around: The Purples turn the table on South Warren. BG by 3

Regular season: October 23, Henderson won in Paducah 21-14. McCracken’s Marc Clark is thought of as an offensive guru in Kentucky coaching circles. He also used to be known for the 2nd round phase-out, a label he threw off just last season. When last these two met, Henderson rushed for 222 yards while allowing McCracken to gain 147 on the ground. McCracken couldn’t get its passing game uncorked, at all, in that one, only throwing for 64 yards. That is a very uncharacteristically low throwing output for a Marc Clark coached team. If we were Henderson, we wouldn’t count on that happening this coming Friday. McCracken will have to click much better offensively than it missed during the regular season if it wants to upend the Colonels this Friday night. We expect the Mustangs will look like a different club this go-around.