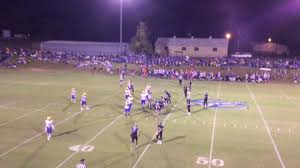 Hopkinsville’s Trevon Jefferson (2022, QB) had been struggling in recent weeks. The coaching staff knew just what to do to get its talented, D-1 QB prospect uncorked. The Tigers unleashed on North-Hopkins (Madisonville) a quick-hit, quick-strike passing attack which burned the Maroons time and time again and led the Tigers to a big 44-0 district win it definitely needed.

Hopkinsville’s “Mr. Football Candidate,” Reece Jesse, Jr. (2021), also had a big night and on both sides of the line of scrimmage. Jesse, a Rivals.com three-star rated WR, doubled at corner in a game with North-Hopkins the Tigers couldn’t afford to lose. Barring some pandemic related circumstance, the loser of Friday night’s game was “home for the playoffs.” Mr. Jesse made sure that would be the Maroons and not his Tigers.

Jesse had 5 receptions for 154-receiving yards with a TD together with an interception he picked in the end zone and raced 47-yards. Hoptown won 44-0 over North-Hopkins.

George Rogers Clark’s, Jordan Manley (2021), had himself quite the night, if you are a fan of efficient and effective play from the QB position. Manley completed 16 of 24 passing attempts for 267-yards with 2 TDs.

Azariah Israel (2021), has rounded himself into a real prospect in the ’21 class in the RB-ranks. Israel, who 247Sports.com lists as a three-star, national prospect, is a fireplug, quick-twitch, explosive and fast, one man wrecking crew of down-hill rushing production. Israel is listed at 5-10 and tips the scales at 175-pounds running a 40 in the 4.5’s. He reports offers from Air Force, Army, Ball State, EKU, and Kent State.

Logan County’s, Zach Yates (2021) is fast becoming a regular in our weekend recap of outstanding performances. There is a good reason for that, and it is he is an outstanding football player.

Friday night, in the game for first place in the first-District (4A), Yates show, again, why we rave about him as a football player. Yates had 8-solo tackles and 2-TFLs to pace the Cougar defense in a defensive battle for 1st Drstict’s “top seed.” Logan County won the game 14-6. Cade Johnson had a sack for the Cougars.

A kid also doing a fine job for him is a player we nicknamed, the “Hazard Hell-Cat” when he was on the KPGFootball, Middle School All-State team a year ago. HIs name is Hunter Griffie (2024) and the freshman registered 15-tackles to pace the defense in a defensive show down Friday night with Harlan County. On the year, the Hell-Cat has registered 53-stops in 7 game of action (10 solos, 43 assists). He also has a half a TFL. Hazard beat Harlan County 16-8.

Perry County has clawed its way to “respectability” with consecutive wins over Clay County (3-3) and Harlan County (1-5) and look to be getting hot heading into the playoffs. They are 3-4 on the year and 2-2 in the district and with district play finished for this year, they look to be district-8’s (4A) 3rd seed. They will draw a first round trip to Whitesburg, Kentucky and a date with Coach Junior Matthews’ Letcher County squad in round one. First year coach, Mark Dixon, is doing a fine job, and there can be no question.

Hunter Monroe (2024), Owensboro Catholic is one freshman who is absolutely killing it, and so are his teammates. The collective have been vastly better than anyone thought they had a right to be entering the season. Maybe having freshmen contribute like Monroe is a plausible explanation.

Friday night, Monroe carried it 19-times against Butler County and gained 149-yards, scoring 3 of the team’s 6-rushing TDs. Braden Mundy (2022) chipped in 141-yards on only 6-carries and scored once.

Max Johnson (2023) had a huge game for Hazard which won a district contest against Phelps on Friday night at Phelps. Johnson carried the football 29-times, gaining 224-yards from scrimmage while scoring once. Landon Dotson (2022) had a terrific game for Phelps, albeit in a losing cause. Dotson registered 18-tackles and his big-brother, Riley Dotson (2021), had the team’s lone interception.

West Carter has run its record to 6-1 this weekend with a win over Class 5A, District 5 Boone County (1-6). Leetavious Cline, another guy whose name seems to make this report most weeks, had another big-night. Cline carried it 26-carries for 202-yards rushing with 3-rushing TDs. Cline also scooped up a fumble and carried it 50-yards for a TD to go with his 8-tackles on the night and 2-TFLs. West Carter won 26-13 over Boone.

Receiver Logan Reese (2022) for the Class 6A, District 1, Marshals, from Marshall County, had a huge night in the team’s narrow escape from Elkton, Kentucky in its battle with pesky Class 2A, 2nd-District, Todd County Rebels. Reese had 4 receptions for 139-yards with 2 TDs.

We would call that a pretty significant contribution in a 5-point margin. Logan also recovered a fumble, gaining for his team a critical offensive possession. The Marshalls would be the first to tell you they found the Rebels from Todd County a real hand full. Marshall County held off the home team 19-14.

Let me let you in on a secret people in the know already know. Crittenden County is a challenger for the 1A-Title this and most other years. One reason is they have real football players dotting the roster and lineup. Real tough guys.

They don’t have any tougher than Caden McCalister (2021). McCalister showed his mettle, Friday night, with 21-carries, gaining 197-yards rushing, and carrying it across the goal line 5-times. He also contributed 5-tackles on the night defensively. The 5-11, 188-pound “tough guy” from Marion Kentucky also sports a 3.8 GPA, so put that in your pipe and smoke it!

Caden’s teammate, Tyler Boone (2021) is a tough-customer too. Against Russellville, Boone was credited with 17-tackles with 4 of those coming behind the line of scrimmage. Crittenden County beat Russellville, in Russellville, 47-6. Wow!