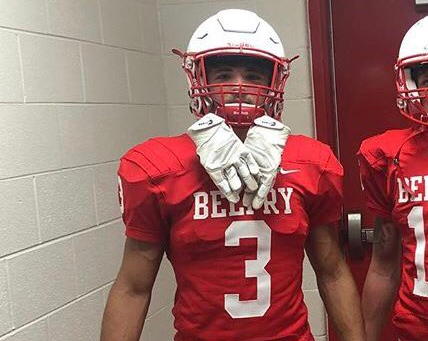 There were some impressive performances this past Friday night and it was really hard to select just one player. There are some really terrific players around the commonwealth of Kentucky in a state which goes under-recruited for the talent it has. Still, the weekend was filled with primetime matchups and performances to match.

Mingua Beef Jerky Company and we want to award the distinction to as many players from around Kentucky as we can. While we want to spread it around, we will from time to time, as the information is available to us, update the reader on what former winners of the award have done in subsequent weeks, like we have done with both William Long and Adrian Stringer this week. Both of those young men had huge weeks and led their respective teams to monumental victories. That being said, let the “race for the world’s finest beef jerky” commence.

Adrian Stringer, a former winner of the award, had a week which would easily be “jerky-worthy.” Stringer threw for 485 and 4 TDS to lead his Hopkins County Central “Storm” over cross-town and intra-district rival, Madisonville North-Hopkins by the score of 40-35.

Another former winner of the award, Darion Dearinger, is having quite a season albeit on a team which has taken a considerable nose-dive from where it was just a couple seasons ago. Anderson County’s prospects may appear dim but the same isn’t true for Kentucky’s top-rated DE. Dearinger in 4 games has registered 45-tackles, 11.5-TFLs, 4-QB sacks, and an astounding 21-QB-hurries (“Pressures”), a statistic the KHSAA doesn’t tabulate but one both tabulated and reported widely among the remainder of the football playing (and reporting) world. Try amounting statistics like his playing on a defense where every single opponent’s scouting report fittingly begins with “Don’t run at Dearinger!” Anderson County lost to Collins, 50-14, in dropping to 0-4 on the year, with its next scheduled opponent being listed as Bourbon County in Lawrenceburg on October 9.

Isaac Dixon (Rt.) has been on our list every, single week. We suppose that is why he is a “Mr. Football” candidate. Against Floyd Central, Dixon carried it a paltry 8 times from scrimmage. That didn’t stop him from gaining 251-yards in those 8 carries and scoring 4 rushing TDs. Dixon’s Belfry Pirates beat Floyd Central 48-18. On the year, Isaac Dixon has 43 carries for 879-yards gained from scrimmage with 12-rushing TDs.

That is in only four games. For the mathematically inclined, that is over 20-yards per rushing attempt and scoring a TD between every third and fourth carry. He is averaging close to 220-yards a game rushing and carries it a smidge under 11-times (10.75) a game. He’s been in the running every week.

Harris Phelps had a big night for his Paintsville team which is likely to be the new top-ranked team in the upcoming Associated Press Top-10 poll to be released later today. Phelps carted the football 12-times for 131-yards and 2 ground scores. Paintsville beat Class 4A, Perry County Central 43-0 in Hazard, Kentucky.

Our first winner, William Long (Rt.), from Breathitt County, won the award before the season started. That doesn’t mean he hasn’t done plenty to merit the award he won on the field, once play began. Friday night against Middlesboro in Jackson, Kentucky, Long was brilliant. Without his play many on “The Riverbank” believe the outcome would have been vastly different than the 35-20 score posted in Breathitt’s favor. Long had 7-tackles overall (4 solos, 3-assists) with 3 TFLs and 2.5 QB-sacks. For the year, in 10-quarters of play (he missed the second half of the Estill game with cramps), Long has 23-tackles (15 solos, 8-assists) with 7-TFLs, and 2.5-sacks. He’s done all this while playing offensive center too.

Talk about efficiency, Crittenden County’s Luke Crider had quite a night for a guy who didn’t throw but 10-passes all evening. Crider was 6 for 10 for 280-yards passing and 3 TDs against a lone interception. Xander Tabor etched his name on the “jerky list of possible candidates” too. Tabor ran the football 11-times for 166-yards with 4 rushing TDs. Preston Turley caught 2-balls for 108-yards receiving with a TD-receiving for a team which beat Class 3A, Trigg County 56-34.

Austin Gough (Rt.) is one of Kentucky’s premier LBs, on that point there is no argument. Friday night he led a talent-laden “Red Devil” team defensively like he has virtually all season. Gough had 10-tackles in a game where the reserves played much of the second half as Owensboro, this past weekend, pasted Muhlenberg 55-0. Up next for Gough is cross-town rival, Owensboro Catholic and the “Aces” have really got it rolling right now.

LCA had a couple kids really come through when the 2A, top-ranked team, were able to beat Class 6A, District 7, Paul Laurence Dunbar, at Dunbar, Thursday night. One of those kids was Mason Moore. Mason caught 7-passes for 133-yards and 2-TDs for the “little team that could.” Anthony Johns dominated upfront for the Eagles from his offensive line post and senior, Mattie Lebryk led the defense with 9-tackles (7-solos, 2-assists) continuing his strong play. LCA beat Dunbar 54-14 on Thursday night.

Covington Catholics, Benjamin Dickhaus, had a huge night in Catholic’s 45-7 thrashing of Boone County. The Colonels are 4-0 and entertaining Highlands after a week off on Ocotber 16, if the posted schedule is to be believed. That is always a pivotal game for both schools and is one of the commonwealth’s most anticipated rivalries. Dickhaus had 10-tackles against Boone (8 solos, 2 assists) and collected a TFL and 2.5 sacks. Now that is a big night!

Speaking of strong defensive play, Christopher Boarman for Owensboro Catholic hd a tremendous game this past Friday night in the show down for the 2nd-district (2A) between Catholic and 2019 champion McLean. Boarman had 17-tackles, Friday night, with 2 coming behind the line of scrimmage. Catholic beat McLean 37-0 in the game played in Owensboro, Kentucky.

Murray High boasts one of the premier interior defensive linemen, Kentucky-wide, in Sebastian Lawrence (Rt.), Class of 2021. Lawrence has been tough throughout his illustrious career and Friday night, against Paducah Tilghman, was no different. Lawrence had 7-tackles on the evening (4 solos, 3 assists) chipping in 3-TFLs to boot. Wasn’t good enough to emerge with the “W,” which is the only stat about which Sebastian cares anyway, as Murray lost the home-tilt with Paducah Tilghman, 31-21.

West Carter’s Leetavious Cline is demonstrating there is no tackling him and there may be no beating his West Carter team either. Friday night, Cline carried the football 19-times for 262-yards from scrimmage with 5 rushing TDs. Returning All-District QB, Orry Perry was efficient and effective, completing 13 of his 20 passing attempts for 127-yards and a TD through the air. Dylan Roe registered 13-tackles on the night. West Carter is now 4-0, after dispatching Bath County, 53-12, and will play Prestonsburg October 9. They will be a heavy favorite to run the record to 5-0. Coach Daniel Barker has the Comets soaring. We couldn’t help ourselves!