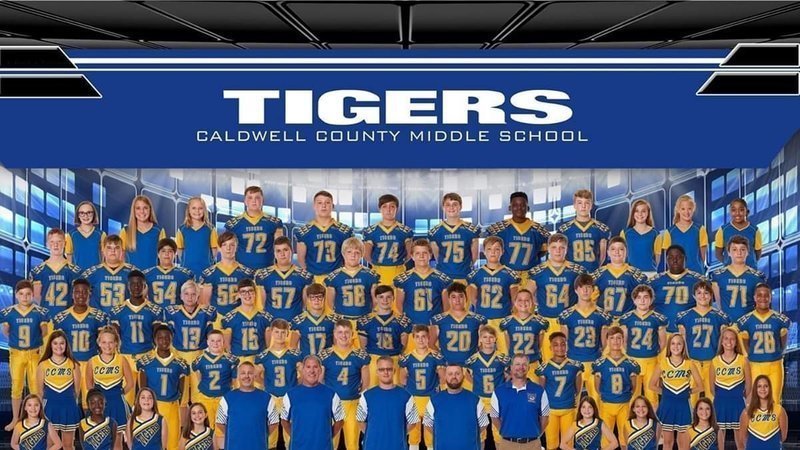 One of the best players from a storied and powerhouse middle school program has moved to Princeton, Kentucky from Pulaski County. Caldwell County Middle head football coach, Steve Kykahiko is one lucky guy.

Sometimes in life the rich just seem to get richer. That is an old saying and one which gets used in football but not necessarily at the middle school level.

The middle school program at North Pulaski is such a program, as it routinely plays for championships, even KYMSFA state titles. We are good friends with Head Coach G.J. Wooldridge and have regularly discussed players and prospects with him.

The middle school program at Caldwell County Middle would also qualify as the rich in the rich getting richer schematic. How many fine players have matriculated from out of Coach Kykahiko’s program and onto the roster of one of the 2A Classification’s premier high school programs on the western-end of the commonwealth? Too many to list them all here.

One “rich” program’s loss was another “rich” program’s gain. Class of ’26 star RB/DE/TE, Cooper Mobley, has transferred from Somerset to Princeton. Looks like those Tigers get to add a tremendous asset to its 8th-grade roster in the Fall of ’21.

Cooper is 6-1 and weighs 200-pounds. He’s quiet, isn’t trying to impress you or anyone else, and has the same demeanor as the title character in “The Outlaw Josey Wales.” If you are a western movie buff, we probably don’t have to explain that further.

Cooper is a physical freak of nature too. First of all, he’s not even out of the seventh (7th) grade and the 6-1, 200-pounder runs the 40 in 5.11-seconds. Have we mentioned the 255-pound bench press or his squatting four-plates (405-pounds)? Well, throw those two numbers in there too please.

Physically, he can play varsity high-school football right now, as a seventh-grader. Imagine where he will be in a year and a half.

Where do we see Cooper playing? Well, he will play both ways at Caldwell Middle and probably for the varsity, high-schoolers too; when he arrives there.

What do we never see Cooper playing? KPGFootball‘s guess would be junior varsity football.

On defense most expect Cooper to come off the edge. He is flexible with bend and outstanding speed (5.11-second 40), especially for his size and stage of physical development.

From what we have been told, Cooper’s in the backfield virtually every snap. He has the athleticism to change direction and the speed to close out on ball-carriers.

Cooper likewise has the raw speed to run down ball-carriers from the backside or laterally chase down opposing players sweeping the end into the boundary. He is athletic enough to play in space, should the ball-carrier get any ideas and decide to put some “shake” on Mobley when left one on one. Translation: it won’t be Cooper made to look stupid out on that island.

He has played RB on offense. He squats 405-pounds. Both of those facts should tell the reader something of his speed, core-strength, and hips.

We project him playing tight-end or H-back (Caldwell runs Spread) in the high school game though remaining at RB is a distinct possibility. Cooper is big enough to block any player in his class, commonwealth-wide, and still fast enough to out-run defenders from all three levels of an opposing defense.

KPGFootball was able to gather critical intelligence from Coach Wooldridge (HFC, North Pulaski Middle & Team Kentucky FBU Elite) about his former player, Cooper Mobley. He related to the magazine, “First of all, he may well have been the hardest working kid on our roster. Cooper (“Coop”) Mobley just brings a different attitude with him. Coop is a natural born leader. During water breaks he would sprint over and get a drink and sprint back to the drill. The boys just followed him. Players like Coop are special and don’t come around often.”

“Coop’s teammates tend to do what Coop does. That is a good thing because Coop is always doing what a football coach would want him to do. Coop’s one of those leaders who doesn’t have to say a single word,” Wooldridge told us.

Coop’s older brother Jackson Mobley was on the coaching staff at North Pulaski last season. He was privileged to get to coach his younger brother. He realizes, perhaps better than any other coach on the staff, what a rarity little brother really is.

It isn’t as though Jackson Mobley doesn’t know anything about playing football either. Jackson was a three-time, AP All-Stater (Honorably Mentioned, 2013; First-Teamer, 2014 & 2015) at Pulaski County High School before signing with Lindsey Wilson College. Yeah, older brother was a tough-guy too.

Jackson was one of Pulaski County’s “fearsome foursome” linebackers (also called “The Band of Brothers”) who helped orchestrate a two-year run to the 5A Title Game in 2014 and 2015. Jackson, along with Mason Helton, Ricky Maxey, and Jesse Whitaker, led the Maroons to a 5A KHSAA title (2014) and a runner-up the very next year.

“I would get text-messages at 11-12 o’clock at night from Cooper. He would be asking me about formations for a team we weren’t even playing until weeks down the road. I would be like, Dude, go to bed, it’s Tuesday night,” Coach Mobley told KPGFootball.

“That is just who Cooper is. He loves watching, practicing, preparing, and playing football. He is going to make a college coach very happy in the near future.”

Now every player who is driven, who is willing to work, who is willing to make sacrifices, is capable of traveling from unanimity to celebrity. Everyone starts out a, “Who’s that guy, never heard of him?” Cooper will be no exception.

However, with the work ethic Coop has, with his quiet confidence, commitment to his craft, and the other intangibles he possesses, “Who’s that guy(?)” turns quickly into, “Oh, that guy!”

It won’t be very long before we’re all saying it. We should just get in the practice of it now, rather than waiting until later.