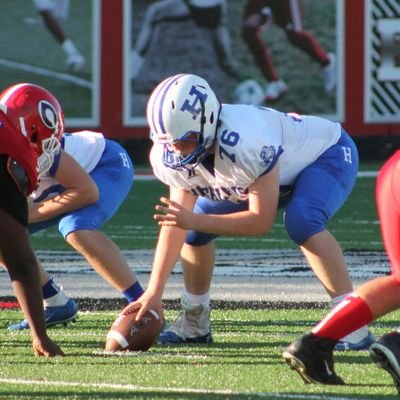 Everyone knows Ft. Thomas Highlands High School is one of the most storied football programs in the country’s history, let alone Kentucky. Not much can be said about 23-titles. It just kind of is what it is.

They didn’t get that way without stellar talent coming through the pipeline. We didn’t become the premier coverage of high school football in Kentucky’s history by waiting for players to become “accomplished” before we tell you about them. Our subscribers want to know the who, what, when, where, and how before it happens.

This is one of those articles. Ethan Phillips is a name you probably haven’t heard unless you follow the middle school game. Lucky for you, we do.

Phillips is a former Kentucky Future Star who has also been invited to the Football University‘s (FBU) “Top Gun” showcase. He’s 6-0 and weighs around 240 and he’s been hitting the weight room in the hopes of getting some early playing time on Friday nights this coming fall.

Not easy to break into the lineup at a place like Highlands. The “Bluebirds” compete in the 5A classification’s 5th-district. That being said, if there is room to break into the starting lineup, Phillips’ apparent deployment gives him a chance. We have seen quality offensive centers play early around the commonwealth.

The Bluebirds were not as good as the fans are accustomed to them being in 2019, going 6-5. They had won 10-games the year prior.

Regularly having to play Covington Catholic and Connor, in-district, isn’t exactly a “piece of cake.” That makes stockpiling wins not the easiest thing to do.

We have seen some young interior offensive linemen step up and play lots of snaps at high levels of competition. By the end of the year, in 2019, Knox Central’s (4A) Bracken Castle was a starter at offensive center. In 2018, 2019 AP All-State (First-Teamer), Owen LeMaster (OG), was starting for Johnson Central (4A) as they closed out 2018 during Owen’s freshman campaign.

We would note that both Castle and LeMaster were (and still are) big weight-training guys even before either hit 9th-grade. You have to get your body ready for the rigors of varsity football. The road map is right there in front of you. The path is clear.

Well, Ethan Phillips is a big weight room guy too. We have already seen video of him squatting 325.

Phillips has good size, uses his hands violently and well, and has the core strength to sink his hips and play at the pad-level an OL coach wants from his center. Will he have the presence of mind to deliver a snap when an interior defensive lineman bumps down his way and the middle linebacker shows blitz coming up the opposite gap?

Well, that is the eternal question for a young offensive center, isn’t it? It will have to happen a few times before any of us knows.

We have seen Phillips deployed effectively along a defensive front too. We have no idea where the Bluebirds see him. We believe they are excited about this young baller coming through the system and we expect to see him dressing, and even playing early, in 2020.