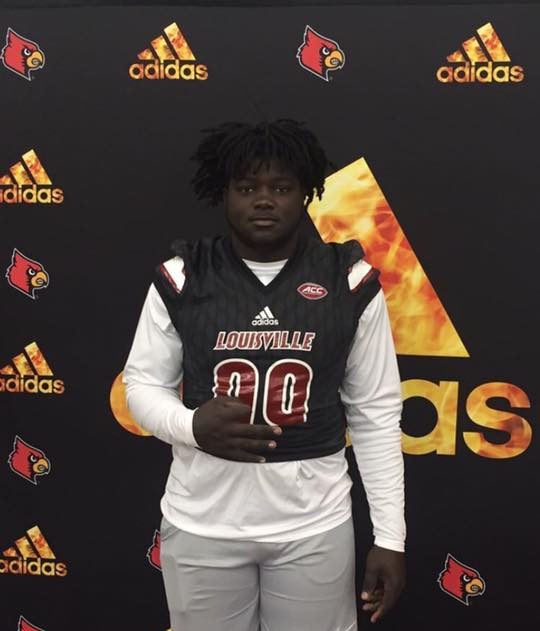 In the spirit of the upcoming Tennessee-Kentucky Future Stars Game, I thought I would highlight one of the 14 players who played in the game last year presently offered by Division I, College Football programs. Ladies and Gentlemen, may I present 6’2″ 275 pound interior defensive lineman Octavius Oxendine. Octavius played his middle school football at John T. Austin Middle School before matriculating this year to North Hardin High School. Octavius lives in Radcliff, Kentucky.

Oxendine plays in an even front, from the 1-3 technique, and is an immovable, run-stuffing brick wall who is also surprisingly nimble and swift enough to chase down plays to the sideline. He has active, violent hands which he effectively fires to get himself free from linemen bent on stemming his tsunami-like penetration into the offensive backfield.  Octavius has developed sideline-to-sideline mobility out of necessity. You would be an idiot to spend the evening running at him. I really cannot write about Oxendine without telling you of how we first got acquainted.

Two years ago, my son William was a 7th grade standout on the Hopkinsville Middle School Varsity (8th grade) team. HMS had qualified for the KYMSFA (Kentucky Middle School Football Association) State Playoffs as its Regionally, number 1 seeded, team.  We had a bye in the first round but would face John T. Austin in the 2nd round of the playoffs.

I want to be fair and, in so doing, I have to concede we were a lot better team than John T. Austin, and I mean by a considerable margin. However, JTA had a nose guard in its uneven front named Octavius Oxendine. He pounded and whipped my young Center in a fashion which can only be described as humiliating. At half time, the Center, himself a 7th grader at the time, but who has developed into quite a player in his own right, was a puddle of tears and mucous streaming down his face. He wasn’t crying, he was sobbing; and I mean chest heaving, sobs!

I put my arms around his shoulders and I said, Son*, you are really getting your tail kicked. I understand. I am a full grown man and I can’t whip that kid. But, it’s not okay that you have started to just let him through because you would prefer he kill the QB and RBs than you. I am not okay with that! That young man learned a big lesson that day about sacrificing himself for the good of the team and to protect his teammates.  He grew from that whipping and became a better man and player for it.

We won that game 18-12 and doubled, sometimes tripled team, Oxendine the entire second half. He almost beat us by himself. Perhaps that is why Kentucky Prep Gridiron wasn’t surprised to learn the University of Louisville pulled the trigger and offered the 2020 prospect during his freshman campaign. Oh yeah, when I shook his hand at mid-field after the game, and his helmet was off, it still didn’t appear to me I was shaking hands with an 8th grade kid.  If you are wondering whether Oxendine was inordinately old for an 8th grader, he wasn’t.  Octavius Oxendine was in the class he should have been and both has been and is, even now, an excellent academic student.  KPG proudly reports Oxendine has a 3.8 GPA to go along with massive size and Herculean strength.

Octavius is just one of the many examples of the kind of young talent which the Commonwealth of Kentucky boasts and one of the reasons we are so proud to publicize these Kentucky players. Tennessee may not face the Octavius Oxendine in this year’s Future Stars Classic, but there will be Octavian-like players there to fill his enormous shoes.

*The player I was referring to as Son wasn’t my consanguine son but all of the boys I coach are like sons to me and I often refer to them as such.