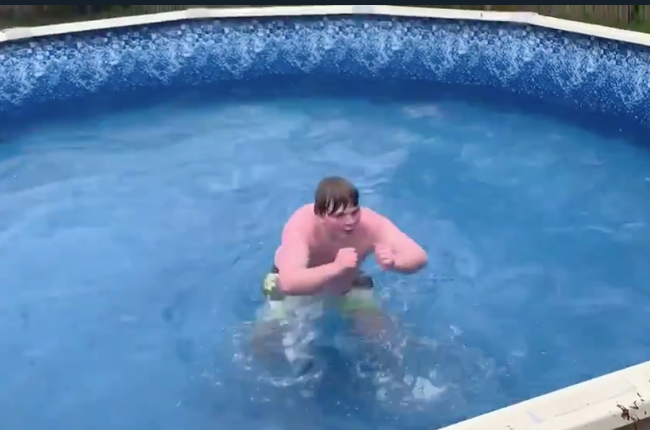 Class of 2024’s Lucas McCarty takes every opportunity to get better, even when in the backyard pool!

In a set of videos which have been posted to Twitter, and none of which have yet gone viral (shockingly), Lucas McCarty is showing us all the way. This rising freshman interior offensive lineman, 6-0, 265-pounds, isn’t sitting around bemoaning the down time or crying about his offseason preparation being derailed. He is taking every opportunity to get better and to train no matter where he may find himself, even if he’s in a swimming pool.

With apologies to Fat Joe, Remy Ma, it appears nothing can stop him, he’s all the way up. With attitude and can-do spirit like what he is demonstrating on Twitter, this magazine can confidently say to David Jones, his head coach, that perhaps Lucas McCarty’s…got what you want, he’s got what you need coming to open running lanes and pick-up middle blitzes for the Colonels in 2020 and beyond.

Point is…with gyms closed all over Kentucky and high schools forbade from allowing players to lift in their facilities, people are having to invent other ways to train. Players realize they need to get ready for a Fall which looks more and more likely to start, pretty near, on time.

You see, UK has announced it is playing. Ticket-holders have been asked to go ahead and purchase season tickets and just last night UK announced students will be reporting to campus for the Fall semester. As goes schools like Kentucky, Louisville, and the rest…so goes Kentucky.

There is no way the KHSAA can tell the high-school kids we can’t let you play for fear you’ll kill your grandparents and then have them watch live or on TV 65,000 people at Kroger Field breaking every conceivable social-distancing rule on every home Saturday. It would be utter-bedlam. Talk about your protests.

Besides all of that, neighboring states are opening full-bore. By Fall, our being shut-in while every state around us is running full-throttle is like saying you’re swimming in the end of the pool where the kids don’t pee. That’s right, there really is no end devoid of pee. When the kids pee in the kiddie end, the pee goes throughout the pool, true?

Now we go back to our point. Lucas McCarty has posted videos of working out in his house to music, the I’m all the way up video is brilliant by the way. He has shown us working on his back-slide in his swimming pool. He does up-downs, push-ups, sit-ups, pretty much any and everything he can fathom, wherever he happens to be, to get better.

That’s exactly how one gets better. The great ones know that. The great ones don’t let anything, and I mean anything, get in the way of them striving to improve every facet of their performance each and every day.

Is Lucas McCarty destined to be a great one? Probably too soon to tell that; but he is off to a promising start. He’s doing the kind of things great ones do.

Perhaps, and we’re just throwing this out there, but perhaps nothing can stop Lucas McCarty. Perhaps he’s got what Bourbon County football wants and what they need. Perhaps he’s headed all the way up!