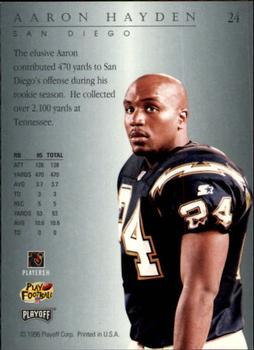 Those of us who are University of Tennessee fans (I attended UT and count myself among that legion) certainly require no introduction be made here. I am not sure we have forgiven the fact Aaron’s son, Chase, spurned our Vols and elected to take his considerable talents and 4 star rating to Arkansas, but neither father nor son needs any introduction to Vol Nation. Perhaps, the only reason for this article is to inform Clarksville, Tennessee, and those who will be descending on The Queen of the Cumberland, that Aaron Hayden will indeed be in the house.

Aaron Hayden came to the University of Tennessee for his inaugural season in 1991 and was a much ballyhooed RB recruit out of Detroit’s Mumford High School. Notwithstanding having to split carries in the backfield with James “Little Man” Stewart from Morristown, Tennessee much of his college career, Hayden still managed to gain over 2,000 yards from scrimmage over his four years on the Hill. Hayden was drafted in the 4th round, out of college, playing professionally for the San Diego, Chargers. Kentucky Prep Gridiron has researched Coach Haden and is unaware whether he has before coached the game but he certainly was able to play it.

While Hayden’s coaching curriculum vitae may lack entries, joining Coach Hayden on his staff are two salty, capable, and experienced coaches both with ties to Clarksville, Tennessee. KPG has learned that former Hopkinsville Tiger and Kentucky Wildcat, Steven Kelley of Clarksville will coordinate the Defense for Tennessee while Vince Jenkins, presently employed by the 101st Airborne Division in Army Intelligence, will handle the DBs. Kelley and Jenkins were both on staff at the Clarksville Academy and have both been faculty at the prestigious National Football Playmakers Academy.  KPG predicts this Tennessee 8th grade team will be well-prepared, disciplined, and, no doubt, talented.

Come out in support of this game June 17, 2017 @ Fortera Stadium on the Campus of APSU and please remember ballers…PLAY THROUGH THE WHISTLE!