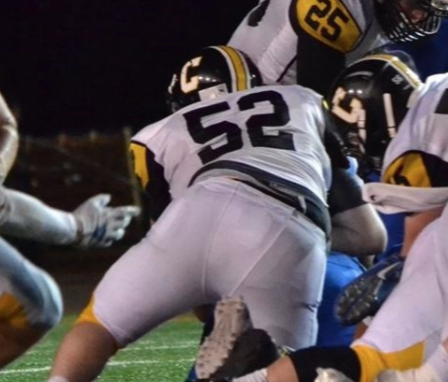 We couldn’t be any bigger fans of Johnson Central’s Owen LeMaster. If you love the offensive line (and we certainly do), and if you admire hard-charging, ground-pounding, drive blockers in the run game, LeMaster is your man as much as he is ours.

We don’t talk too often about “prototypes.” Prototypes are generally a commercial term and are loosely defined as a first, typical, or preliminary model of something, especially a machine, from which other forms are developed or copied.

Now Owen LeMaster isn’t the first or even preliminary model of a Kentucky high-school, elite-level, interior offensive lineman. However, he is certainly a model at the position, or other form (if you will indulge us), from which other guards around Kentucky should be developed and/or copied.

Owen made the first-team, AP All-State football team in 2019 along the front. LeMaster came back in the abbreviated 2020-season and demonstrated new facets to his game.

First, if you will watch his highlights we have linked (blue), you will notice he is quick and agile enough to play in space and aid the run-game in the second and even third levels. Also, and this is a question raised about every offensive lineman who plays in a run-scheme like Johnson Central’s, he appears adept at pass protection, playing back over his feet and vertically setting and holding his ground against the bull-rush, with the agility to stay in front of the “swimmers,” “spinners,” “stabbers,”and “rippers.”

This year, the 6-1, 280-pounder, anchored an offensive line which paved the way for 3,884-yards rushing and 56-rushing TDs in 11-games. The Eagles, with everyone in the stadium knowing what was coming, gained 353.1-yards and a smidge over 5-rushing TDs per outing.

LeMaster has a bench press in the 360-pound range, shuttles in the high 4’s, and runs the 40-yard dash around 5.2-seconds. He’s strong, quick, powerful, and explosive; all attributes in high demand along any interior, offensive front.

LeMaster will be a strong candidate to repeat on the AP’s All-State team, having made the first-string as only a sophomore. He will also be courted heavily at the next level with the grades and academic scores broadening his options at that level.

Look for Owen to get a lot of reps at offensive center during his senior campaign. The move from guard to center isn’t a daunting one, and he has the intelligence and football savvy and IQ to thrive at the position and the frame to play at any college level there.