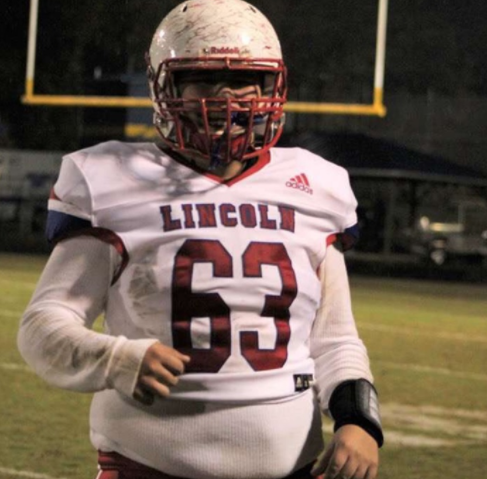 We have been doing a series we call “Break-out Players.” These are the high school players we believe will have huge years of production this coming Fall.

Many of these guys are ’22s you may not have heard of but who look, to KPGFootball, ready to burst out onto the scene. One of those is playing offensive guard at Lincoln County High School. His name is Zachary Young. We just call him Zach.

He’s on the same scrimmage line as Holden Stamper. That doesn’t seem fair.

Zach Young is a player. If we are being honest, he is lacking in area of “self-promotion.” He doesn’t lack anything in the “can really play football” area.

Sure, he needs to publish ’20 highlights, in stead of just individual game highlights, but if one is willing to wade through the different single game highlights you just might find you like what you see. We did.

He’s a very effective “puller” up front. He gets out in space well, squares up his target well, is quick down the line, and explodes into the defensive second level and connects. He latches on and drives his feet through the whistle.

The team gained these yards in 348-carries while scoring 34-rushing TDs. Over the nine games, playing a Class 4A schedule, the Patriots gained 7.23-yards per rushing attempt, scored a rushing TD every 10th-carry, and scored 3.8 rushing TDs every time they took the field in ’20.

Zach was a big part of this success. We believe he will be an even bigger part in ’21. There are many reasons for our optimism.

Zach looks to have “good feet.” Young shoots his hands well. Young sinks his hips, collects, and delivers a stifling “punch” to the breastbone of his target.

Does he have the mental acuity for one of football’s most intellectually demanding positions? Before you look at us quizzically, you will discover this is a legitimate question.

Young is carrying a 3.0 GPA at Lincoln County. He hasn’t reported a standardized test score yet, but we expect his score will be more than enough to make him an attractive “get” for many schools at various levels of college competition.

This is a very good pointer for all the athletes hoping to matriculate to the next level. Having academic scores can make any athletes a more attractive take for a college program. One reason is the possibility to combine athletic money with academic money, saving the football program money to attribute to other prospects.

While this may be of no concern to FBS-types, it is an issue from the FCS through all the other levels of competition. The name of the game is for your school to be paying for your experience and education. It’a a matter of whose picking up the tab?

In the end there really isn’t but one important question. “Coach, who’s paying for all of this; you or I?”