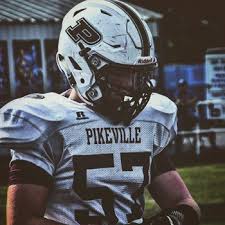 I know when we hear the word Hammock most people immediately think of a piece of back-yard, lounging equipment often used for napping, but people around the Pikeville Football program will have to be excused should they think of something altogether different. In Pikeville, especially around the football sect, the word Hammock undoubtedly makes Panther fans think of Landon Hammock, the 6-1, 220 pound DT/OT whom is set to join the varsity high school squad this season after leading the middle schoolers to the State Middle School Football Championship game. The middle school program’s success leading to success at the high school level is a familiar phenomenon too.

Any high school football team will tell you it is essential to have a constant influx of football talent coming into the program yearly from its middle school ranks. For instance, in ranking teams for the Associated Press throughout Kentucky, I (at least preseason) will look to see how the sophomores and juniors on a particular team did as middle schoolers. I have Owensboro Senior highly regarded in my Class 5A, preseason rankings, largely because the 2016 OMS team was the best middle school team I have ever seen play. I have Hopkinsville High School highly regarded in Class 4A at least partly because its 2016 HMS team was 12-1 and narrowly lost in the State Semis, 38-36 to the eventual State Champion (TK Stone). TK Stone is always good, winning it all in 2016 and making State Semis appearances in both 2015 and 2017, so, naturally, the high school it feeds (Elizabethtown High) challenges for the State Championship in Class 3A every year. Two middle schools which played each other for the State Middle School Championship, just last year, were Corbin and Boyle. Seems to me like they are annually stout, huh? Of course one of the best mountain examples is Belfry Middle School. Belfry has won 4 State Middle School Football State Championships. How have players from off these teams fared for the high school team? If memory serves, they did well. Take my word for it folks, the examples of this holding form are literally countless.

So the Pikeville Panthers, a team I have preseason ranked No. 1 in Class 1A, is set to get a group of 9th graders coming into the program whom have played for a State Championship, have won its Regional Championship, expects to win football games, and knows it more than measures up to the players across the Commonwealth they will contest over their four-year, high school careers. I would call that an enviable situation. In the middle of it all, is the promotion to high school football of a player from the Mountain All-State Football Combine whom might not have won top honors at our combine, but, at a lot of other combines, certainly would have given the same or similar performance. Landon Hammock has a really good frame at 6-1 (and likely to still get taller) and 220 pounds that are well proportioned and densely muscled. Landon ran a 40 yard dash at 5.17 seconds and a pro-agility shuttle of 4.9 seconds. Landon clipped the L-cone drill at 8.4 seconds and repped the high school bench press, combine weight of 185 lbs., six times. As a 2022 player, and having just finished middle school, it was ambitions of Landon to rep at that weight at all as we wouldn’t have looked twice had he elected to rep at the middle school combine weight of 115 lbs. That makes Landon’s approximate, one-rep, bench press maximum lift three pounds shy of two plates, or 222 pounds. For an incoming freshman? Man, that is right impressive in deed.

So, you guys who believe you are on the depth chart ahead of Landon at Pikeville High School presently – you can sleep on this Hammock if you want; but, it is obvious to KPGFootball, that would be ill-advised. It is pretty apparent Landon isn’t just lying around this summer. If you know what I mean…