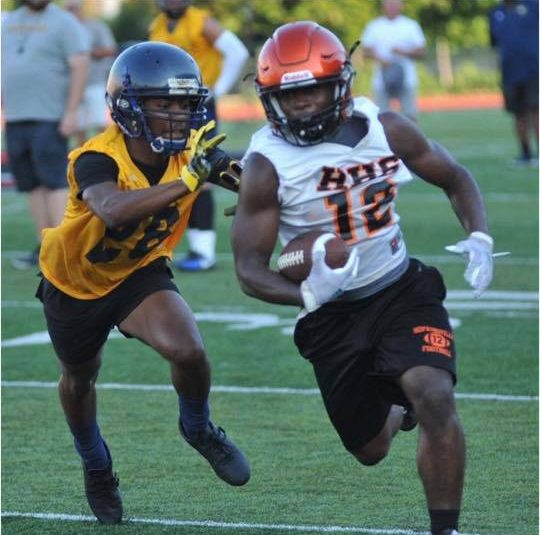 I know this seems like a odd way to begin an article, but not if you take the circumstances into consideration. I know the people in the Western Kentucky area are fully aware of JaTorian Dillard (Torian), the 5’8″ 180 lb., 4.5 second 40 yard dash, returning all-district and all-KNE (Kentucky New Era) area RB. He came up from middle school and started at RB for a 10-2 Hoptown High Tiger Team as a freshman. Dillard started at RB as a freshman! I’m sorry but that is so signifiant I had to say it twice.

Torian followed up his freshman campaign by running for nearly 800 yards and 9 TDs from the Spread Offense. He gained 800 yards from scrimmage and scored 9 rushing TDs in a Spread Offense known for substituting the screen game for the run game! Sorry, repeating my self again I see.

If there is a guy on the 4A power, HHS Tiger’s Football Team who will benefit from the regime change, it’s Torian Dillard. Dillard, who gained nearly 1,500 yards from scrimmage his first two years in Orange and Black, playing within the confines of Coach Clark’s Spread Option Offense (Clark is departed to McCracken County), gets to now play within the North/South, down-hill, run-pass balanced, scheme of Coach Craig Clayton, a.k.a. The Silver Fox. Talk about a  down-hill running back’s dream scenario.

We were able to reach the Strength & Conditioning Coach at HHS, Adam Dowland for comment in connection with the publishing of this article.  Coach Dowland said the following about Dillard…JaTorian has exception balance and is a really good jump-cutter with good burst and vision. Dillard has the classic running-back build, low to the ground, with great change of direction. If he were a quarter-horse, he

would be a champion barrel racer. Dowland went on to share that Dillard has above average upper body strength and excellent lower body strength for his age and position. Coach Dowland additionally shared that Dillard, in the Spring, showed he was competitive and was both willing and able to run through contact, between the tackles, with very good inside vision.

Coach Craig Clayton, when reached for comment, related his offense is designed for north/south, downhill runners to do very well. Coach Clayton said Torian would have been a fine I-back, in the day, and promised the Tigers would find ways to get Torian the ball, whether by direct hand-off or throwing it to him in space with opportunity to get after the catch production. Basically, Clayton said, we expect Dillard to have a big year and flourish in our offensive system. Great system for running backs.

Kentucky Prep Gridiron also expects big things from JaTorian Dillard who is not just a fantastic football player but an even better person. Dillard’s on-field production, which was really good in an offense which didn’t feature his type of player, will spike significantly this coming season. One thing is certain, if you expect to tackle JaTorian Dillard ballers you better remember to…PLAY THROUGH THE WHISTLE!