Well, if you are any type of Kentucky High School Football fan, or even University of Kentucky football fan, you have to remember Mark Higgs. In a real lesson for all young ballers, it is reported that Higgs was discouraged from playing football because he was 5’7″ tall. Granted, Mark Higgs was also nearly 200 pounds, a good sized back, at least weight wise, when he played. All Higgs did was surpass many of the rushing records at Owensboro Senior on his way to two selections as both a High School All-American and All-Stater. Higgs left Owensboro Senior in route to UK with 6,721 yards from scrimmage and 75 rushing touchdowns. 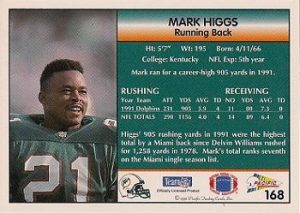 Owensboro Senior High School is the 7th winningest program in the history of the KHSAA and legendary coach Gerald Poynter won 28 consecutive games for the Red Devils from 1973-1975. Considering the success to which Coach Leonard Brown has guided in the Owensboro Middle School program, it wouldn’t appear the train is slowing any. The 2021 Class, entering the Red Devil program as freshmen this year, never lost a Middle School game over a 3 year period. As a member of Kentucky Prep Gridiron‘s editorial board, and as a Middle School coach myself at HMS, I can tell you it was widely accepted throughout the Commonwealth that the best Middle School football team in Kentucky, regardless of classification, the last three years was OMS. OMS didn’t participate in the KYMSFA play-offs or play for a State Championship, but, this past season, Bowling Green Middle School lost the Division I Championship game to the Newburg Tigers 14-11, and OMS had a running clock on BGMS in the 2nd Quarter when they played during the regular season. So, draw your own conclusions…

In summation, Owensboro Senior High School lost a lot to graduation and may be one year away from challenging for the Class 5A State Championship. However, they have some 2021 kids upcoming who are plug-in types (Austin Gough, offensive MVP of the TN-KY game), meaning they will arrive physically capable and ready to immediately play High School Varsity football as freshmen. As the 7th winningest program in Kentucky High School history, Red Devil fans have to hope they are forever doomed to repeat it!