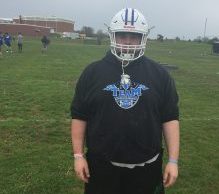 North Laurel Middle School is home to some 1,100 students in grades 6, 7, and 8. The Jaguars are located in Laurel County, Kentucky. I am not sure, but am willing to bet, that out of the 1,100 students who attend North Laurel, there aren’t too many as large as Laurel County’s Kobe Burke. I first reported on Kobe in my article detailing the combine in Glasgow, Kentucky. For your convenience, the article is linked here. In the article, and this is just my bragging, I featured about 10 players whose combine performances stood out to me and all of them either were selected to the roster or were alternates. I haven’t lost my eye. One guy on whom I focused in the article above linked was Kobe Burke. He stood out to my all-knowing, infallible eye for football talent. Of course, at 6-1 and 300 pounds, he would have been quite hard to miss.

One of my favorite sayings in football is mass is mass. There are big guys who are problems because you just can’t move them. Burke is a lot of mass. Unlike a lot of players who weigh what he does though, he is well put together, with a lengthy, wide frame, and long arms. I would think he would forecast as a tackle in the Future Stars game, whether that is right or left along the Kentucky offensive front would depend on the OL coach’s opinion as to how well he moves. Burke’s combine numbers, in the speed and quickness department, weren’t altogether impressive but he is really big and his agility, quickness, explosion, and speed will all be altered, significantly, as he gets older and spends more time in the weight program at his high school. Sometimes young linemen need time to grow into a large frame.

Burke is a perfect example of how linemen selected to the 8th grade Future Stars team, who will report to the high school program as soon as school adjourns the 24th of May for summer practice and work-outs, sometimes look complete different at Future Stars’ camp than when selected. A good example of this was William Long, last year, Octavius Oxendine and Logan Parker two years ago. By the time those three reported to camp before the Tennessee-Kentucky game, all three of them looked like grown men, were bench pressing between 275 and 300 pounds, and were all squatting over 4 plates (405 pounds). That, folks, is just not a middle school football player anymore. If you will look at the picture to the left of this paragraph, that is Kentucky’s William Long and Tennessee’s Toleo Malone in close time proximity to when they faced each other in last year’s game. Do either of them look like 8th graders to you? No, me either.

The point is players like Jacoby Thornsbury, Kobe Burke, and William Hughes are big now, but KPGFootball predicts you will hardly know them when they report to Morehead for camp the week before the game in Georgetown, Kentucky. At least, if they haven’t undergone significant physical change, it’s going to be a long game for the three.