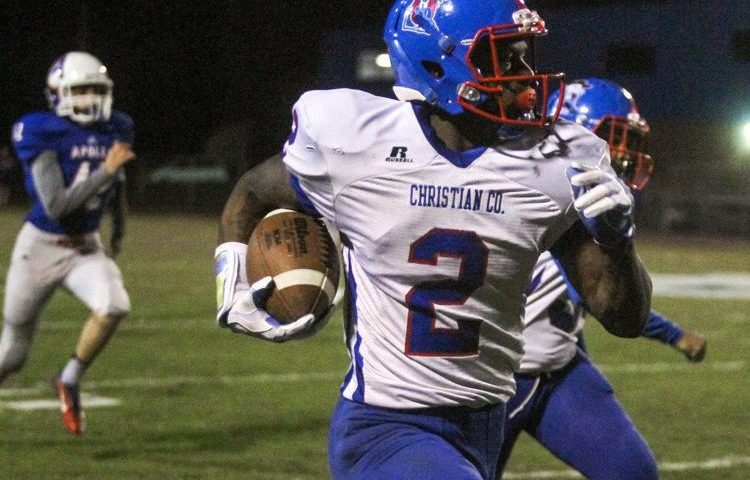 Keyron Catlett had one Hell of a career at Christian County High School in Hopkinsville, Kentucky. It was story-book, really. How many receivers can boast of 213 career receptions, 3,614 career yards receiving, and 36 TDs caught? The number is as finite as the number of fingers on one’s hands, at least in the annals of Kentucky high school football history.

It was surprising to exactly no one when he first committed to Western Kentucky University to play football, on a full ride, for one of college football’s, Division I, FBS schools. When coach Jeff Brohm got a head job at a Power 5 conference team (Purdue, Big 10), and he desired to take the talented pass-catcher with him to West Lafayette, Indiana; that didn’t surprise too many people either. When Catlett graced the two-deep at Purdue, as a true freshman, at his position of WR things appeared to be headed down the well-worn path lain by Catlett’s hard work and sacrifice for the Keyron Catlett, NFL Express.

This past year, as receivers came into the Purdue program and rose past Catlett on Purdue’s depth-chart, and as receivers continued to be an emphasis of Purdue’s recruiting efforts, the train seemed, at least to Catlett, to be de-railing. So, Keyron Catlett has hit the reset button.

Catlett has elected to transfer to Hampton University in Hampton, Virginia; a Division I, FCS school, to continue both his academic and athletic careers. In route to Hampton, Virginia from West Lafayette, Indiana, Keyron and KPGFootball got the opportunity to do this interview which contains, in KPGFootball’s opinion, sage and wise advice together with uplifting words of encouragement for other athletes now traveling the recruitment super highway.

KPGFootball: Keyron, what led to your seeking transfer to Hampton, University?

Catlett: Well, there are no hard feelings comprising any motivation to transfer. I am purely motivated by my personal desire to do what is best for my academic and athletic career. I simply wasn’t playing as often as I would have liked and felt Purdue no longer presented to me the opportunity to be the player I wanted and felt I could be.

KPGFootball: Did you feel Purdue was recruiting over you at your position?

Catlett: They were, but that is college football. I will always cherish the friendships and bonds I was able to build in my time there; but it certainly felt like I wasn’t an integral part of the offensive coaching staff’s plans going forward.

Catlett: Well, I had a prior relationship with Coach Prunty from when I was in high school and he recruited me back then. It still feels as though the two of us have a personal connection. Hampton is a fantastic school which has a very prestigious academic reputation and a degree from there carries a lot of weight in the workforce. It was an easy choice.

KPGFootball: What will be your major at Hampton? What course of study most interests you?

Catlett: I was studying Human Services & Family Development at Purdue and intend to continue on that path when first arriving at Hampton. That certainly isn’t set in stone. This path is a true reset for me, both athletically and academically, so I might well change my major once I get to Hampton. Right now, that academic course is still satisfying to me.

KPGFootball: Do you have any advice for the Kentucky High School players going through the recruiting process, presently?

Catlett: I am really glad you asked me, because I do. The first thing I would tell any young college prospect is to go where you are wanted and where the school has a plan, going forward, in which you are envisioned as fitting. Schools in recruiting will all talk like they want you but you will either know or feel when the interest is genuine. Don’t get caught up in the hype and politics of recruiting. At the end of the day, its about getting your education and building bonds and friendships which will carry you throughout life. If you’re good enough to play professionally, the NFL will find you. Hey, they found Jerry Rice, they found Walter Payton, they found Shannon Sharp and Terrell Owens, and they will find you, if you are fated to be there. If it is in your destiny to be a professional ball player, it will happen for you. I am big on faith and I believe God will guide us to where we need to be. The Almighty has equipped each of us with an inner voice which speaks only to us. That inner voice will tell you which school is best, which one will be a home. All one has to do is listen to that voice! Heed what it is trying to tell you!

Catlett’s inner voice has informed him home will now be Hampton University in Virginia. In transferring to Hampton University, Catlett will get the opportunity to play for a guy who has a wealth of FBS level, football coaching experience. Robert Prunty served as the associate head coach and defensive coordinator at East Carolina University and was, for four years, the associate head coach at the University of Cincinnati. While at Cincinnati, Prunty coached DEs for one year and coordinated the defense, for the Bearcats, the other three. Prunty also served three years as an assistant under Tommy Tuberville when Tuberville was the head man at Texas Tech. Tuberville assigned Prunty, from 2010-2012, to coach the DEs for the Red Raiders. Prunty, at every stop along the way, has been praised as both a recruiter and keen evaluator of football talent.

In seven years at the FBS level, Prunty was a part of five bowl appearances, a conference co-championship, and was recognized by Scout.com as the Big 12 Conference Recruiter-of-the-Year for both 2010-11 and 2011-12. Prunty won similar honors in the American Athletic Conference in 2012-13 and 2013-14.

So Keyron travels today to Hampton, Virginia to join up with a man who has distinguished himself as a recruiter and football coach at college football’s highest levels of competition. Catlett enrolls at a school which sponsors a football team where he feels both wanted and a part of the game-plan going forward. Catlett enrolls in a prestigious academic institution, which, just like Purdue University, grants degrees carrying significant prestige and weight for graduates whom will enter an ever burgeoning, and competitive, future job market. Most importantly, Keyron is getting an opportunity to get a first-class education, paid for, owing to his ability to play a sport he loves and which has, once again, afforded him quite an amazing opportunity.

Good luck Keyron, and thanks for taking time to encourage so many young players around the Commonwealth of Kentucky who are journeying down the same road down which you have traveled so successfully. Good luck to our friend; and, Keyron, travel knowing you are both loved and admired back home in the Bluegrass.