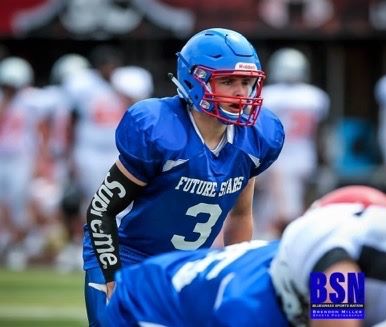 There is a poignant scene in one of my favorite movies. The movie is Once Upon a Time in America.

The movie stars Robert DeNiro, James Woods, Joe Pesci and a host of other big-time stars. In the movie about a rough group of kids, all of whom are jewish, who immigrate to New York and become one of the city’s most feared organized criminal outfits, DeNiro says, “You can always tell the winners at the starting gate.”

The character to whom he says it responds, “I bet everything I had on you.” That fairly encapsulates our feelings about a 2023-linebacker who played sparingly in 2019 but who will absolutely kill it in 2020. At KPGFootball, we’ll bet everything we have on JT Adams.

Scenes like the one depicted to the right, of Adams carrying a tire, are among the reasons we have identified him as a winner, “…at the starting gate.” For those who marvel at our “eye” it really isn’t genius at all.

Now, we aren’t saying Adams isn’t a prospect. We believe he is. At what level is outside his control and ours.

Adams can’t control attributes like how tall he gets, how long his arms get, what the circumference of his head will be and any other of the inane characteristics big-time football has begun prizing. There is a big-time program which, a few weeks ago, offered a junior at a high-school in a state continuous to Kentucky as an “athlete.”

This “athlete” was a real terror on Friday nights. He contributed to his HS team one offensive-TD and 9-total tackles, in 12-games of action his junior season. With production like that, we can’t guarantee he started.

So KPGFootball would ask this FBS program, when and where does this prospect’s athleticism manifest… in Sevens, at the non-contact combine? If he is really good enough to play where he was offered, when is this rising Senior going to show us he is among the best players in his high-school lineup, much less his state?

We think these questions are entirely fair. We think that offer was ridiculous.

So, we can’t forecast what some college coach is going to think about anything. We can tell you JT Adams is a football-playing SOB.

We are particularly well situated to make that call. That is kind of what we do. That is also why you pay us.

Adams is a kid who looks to be around the 5-10 mark now and looks to be weighing upwards of 180-pounds. He is the son of a football coach and has shown a nose for the ball and a penchant for arriving in a bad mood.

He is one of the best wrestlers around, placing in the Kentucky High School State-Championships as a freshman at 170-pounds after a 3rd-place finish at the Regionals. He won two Kentucky youth championships and a middle school state championship prior to enrolling in high school.

He is an accomplished wrestler. That is certainly safe to say.

Accomplished wrestlers have been outstanding high school football players more times than not through the years. We have some pedigree to rely on too as he is the son of the offensive coordinator and played for Team Kentucky for two years earning Defensive MVP after the 7th-grade Kentucky-Tennessee game.

Look, you pay us to tell you who will emerge. Some of the sophomores out there who will emerge on the Kentucky-wide stage are guys about whom you might have forgotten owing to their year on the JV/Freshman squads. Fans’ memories are short.

We have before written about LeAndre Maxwell at St. X. Today, we are writing about another top-flight talent who, like Maxwell, needed a year of seasoning, in the high school staff’s estimation anyway.

Well, seasoning is over and it is time for a future college player to get thrown directly in the fire. College players find their way on the high school varsity field as sophomores and that is where we are telling you this future Saturday-player will find himself in 2020.

You can always tell the winners at the starting gate. We are betting every dime on JT Adams.