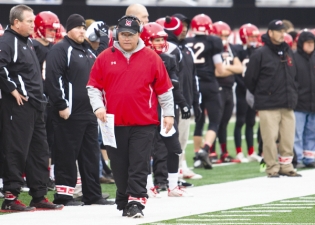 I looked up The 10 Greatest Empires in History…on a website called Spike and learned that, for almost 300 years, the Qing Dynasty ruled China. This isn’t something I would independently know, trust me. The Qing Dynasty is listed as number 7 among the greatest of the world’s ruling dynasties and was the last imperial dynasty to rule China. Interestingly, at least to me, the Qing Dynasty was not ruled by the Han Chinese, the major ethnic population in China at the time, but rather by the Manchus, who were ethnically a small minority of the population.

A dynasty I didn’t have to research very much at all, because I have lived much of my life wedged between the Jackson Purchase and Western Coal Fields, in a region called Pennyroyal, is the dynasty which has been ruling area, state, and classification football in Kentucky seemingly forever. I would be speaking of  The Mayfield High School Cardinals, of course. According to the KHSAA website Mayfield High School has an 860-253-32 all time record with 12 State Titles and 3 undefeated seasons. Last season, Mayfield turned in a 13-1 worksheet and played in the State Championship Game, losing to CAL (Christian Academy of Louisville). One statistic not too difficult to discover is the Cardinals have won 10 State Championships just with coaches named Morris.

The present edition of the Morris family to guide the football fortunes in Mayfield, Kentucky is Coach Joe Morris. Joe Morris has won 6 titles (2002, 2010, 2012, 2013, 2014, 2015) as the engineer of the train known as the Cardinals’ football program. All his father, Jack Morris, did, while engineering the self-same train was manage to win 31 consecutive games from 1977-1979, win a modest (by Morris Family standards only) 4 State Titles (1977, 1978, 1985, 1986), and playing for the title on five other occasions. Jack Morris compiled a career record of 254-50-2 over 24 years and has been inducted into both the Kentucky and National High School Athletic Coaches Associations’ Halls of Fame.

Now the scary part for Mayfield opponents is Jack Morris still consults with his son’s Cardinal brain trust. That’s a lot of experience and success continuing to perpetuate the winning atmosphere in Mayfield, Kentucky. All of that on field and championship success has netted expectations in Mayfield the Cardinals will win, and convincingly, regardless of opponent. In an interview given last August to venerable and veteran former Lexington Herald-Leader sportswriter,  Mike Fields for KHSAA.org, Jack Morris, in connection with an article about his son, Joe, just having won his 200th game 56-0 over Fort Campbell, said…Our kids believe they’re better than anybody. So if you’re going to beat us, you have to be better than us, I guarantee you that. In that same article, Joe Morris, related a story about beating a pretty good football team 35-7 and having a well-intended fan approach him and remark he didn’t think the team had played very well.

Being one of the most dominant dynasties in the history of Kentucky High School Football ain’t all a bowl full of cherries! Listen ballers! Do you hear that whistle? By the sound of it, those Morris boys are driving their Mayfield High School Football Dynasty through your stadium like a mighty locomotive. Better…PLAY THROUGH THE WHISTLE! I am right certain THEY WILL!