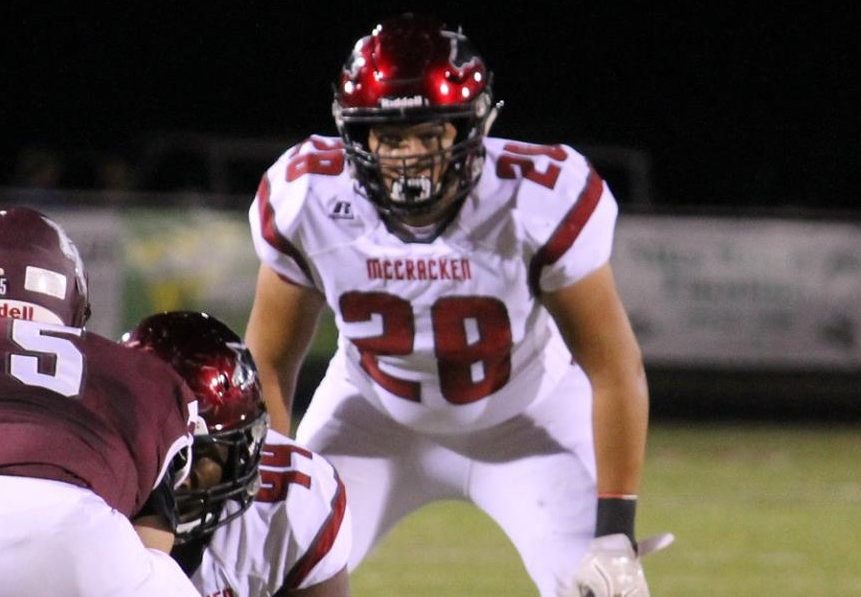 At Kentucky Prep Gridiron, we realize we have a penchant for quoting obscure sources when we are sufficiently desirous of the sentiment conveyed. That’s a fancy way of saying you probably have never heard of Dale Dauten.  Dauten is an American business management columnist, an author, a professional speaker, a management coach, a mediator and someone who once said something either about playing linebacker or being a lawyer, or both, on which I intend to rely in this column about Skyler Mayes. Criticizing lawyers for lawsuits is like criticizing linebackers for knocking people down.

It is my understanding Skyler Mayes has a friend and fantastic player, in his own right, named Ethan Schaaf. Ethan is very likely to have his own feature article on this site before Fall. Ethan’s Dad, is Gary Schaaf, with the firm of Saladino & Schaaf PLLC. My understanding is the firm principally employs its craft representing plaintiffs in personal injury suits. Saladino & Schaaf PLLC is located on Clark Street in Paducah, Kentucky. I have learned Gary is a prominent and reputable lawyer and files, advances and tries personal injury claims with some regularity.

I am in no position to comment on Saladino & Schaaf, PLLC other than I have heard glowing commentary, however, this is an online magazine about prep football and not the law of Torts. The analogy I wish to make is that Ethan’s friend, Skyler Mayes, doesn’t just knock people down with some regularity, but, apparently, all the time.  If we wish to draw the analogy of playing linebacker to lawyering, as Dale Dauten did; then Skyler might be one of the damnedest ambulance chasers playing MLB anywhere in Western Kentucky.

Skyler Mayes is 6’2″ tall and weighs 220 pounds making him big enough to play tackle to tackle, get immediately up into the line and make plays coming right at him. Skyler runs the 40 in 4.62, the pro-shuttle in 4.31, and has a 37 inch vertical, meaning he is fast, quick and explosive enough to also cover both the flats and sideline to sideline. Skyler, who is only 17, bench presses 300 pounds and squats 535 pounds.

These numbers are elite and attributable to both his present strength and conditioning coach at McCraken County High School, formerly at HHS, Zack Self, and the former strength and conditioning guru at McCracken County High School, now at HHS, Adam Dowland. Regardless as to whom the credit belongs for his training, Skyler has worked very hard to answer any questions about whether he possesses the strength to scrape down the line and shed would-be blockers in order to make plays.

McCracken County High School has a new HC in Mark Clark, formerly at HHS and coming off consecutive 10-2 seasons at the Tiger helm. I am sure Coach Clark, in deciding whether to move from Hopkinsville, Kentucky one hour west to Paducah, studied the fact that Paducah, like Hopkinsville, produces a steady and consistent stream of Division I football talent. One doesn’t have to look too far backward to remember tremendous athletes coming from out of McCracken County High School’s football program the likes of Tyce Daniel, the 6’4″ 238 lb. TE who signed with the University of Memphis, Zy’Aire Hughes, the 6’1″ 190 lb. Athlete who Coach Stoops was happy to add to his UK signing class and Evan Sayner, the 6’4″ 250 lb. DE who landed at WKU. The former Mustangs, together with the Mayes kid who will, with little doubt here, tear it up this year, demonstrate the frequency with which the Mustang Football program produces players possessing the frame for which D-I coaches search and the type of athleticism which denotes college players on that level.

I was able to reach and talk with both Skyler’s parents in connection with publishing this article and Skyler’s mom, herself a middle school teacher, provided me with information which also makes recruiters drool. Skyler has a 4.063 GPA in honor’s and dual credit (college) courses. Skyler’s qualifying through the Clearinghouse would appear a foregone conclusion. Recruiting kids who are not likely to succeed in college academically is a HUGE waste of the University’s time and money. They really prefer athletes who are students first, believe it or not!

Here’s a prediction which is not, at all, far-fetched. Recruiters will be finding their way to the largest city in the Jackson Purchase sitting at the confluence of the Tennessee and Ohio Rivers panning for football gold at the all-important MLB position.  At Kentucky Prep Gridiron, we believe they will find exactly that.