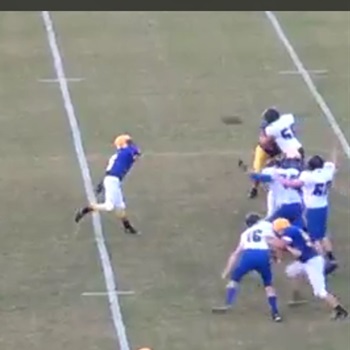 The last time we saw Joby Jaggers in the spotlight while under center as opposed to in the slot or split out wide, Joby wasn’t fairing poorly at all, thank you very much. Joby led his middle school team to a birth in the State Semi-Finals under the old KYMSFA system in Lexington, Kentucky. Sadly, Caldwell County Middle School lost the semi-final game 36-0 to a team with a running back as bigger or even bigger than Joby’s linemen, though way faster. Oh well, such is life sometimes in Middle School football.

That trip to Lexington was the first time Caldwell County Middle had gone to State since Elijah Sindelar, Dee Cain, Jaylen Boyd, Drake Vanhooser and Eli Pepper led CCMS to the Semis. They, like Jaggers’ team, lost in the Semis. However, just two years later, Sindelar and the Gang, led Caldwell County High School to the High School State Championship Game, before the 6’5″ Sindelar spurned the WildCats of Kentucky to take his Quarterbacking skills to West Layfayette, Indiana and the Big Ten Conference. Maybe there is a pattern here. I know folks around Princeton, Kentucky are sure hoping so.

So Shane Burns has quit football to focus on baseball. This has to mean the football team at CCHS is doomed this fall, right? Well, Coach David Barnes, the Jaggers clan (particularly Joby) and maybe even the entire Princeton, Kentucky community says…Not so fast my friend! Jaggers is a lighting quick, ankle-breaking, hiccup who moves the pocket well, attacks the line of scrimmage on the move, squares up and delivers a ball which hits the receivers on time, in stride, and gives them down-field, after the catch, opportunity. Sure the 5’9″ Jaggers doesn’t have the stature you necessarily want at QB; but, then again, did Burns? Probably not. Regardless of height, Burns still threw for over 6,200 yards and 71 TDs over his Sophomore and Junior campaigns.  True, Joby Jaggers isn’t Shane Burns; but Joby is a different style of quarterback than Burns. Different doesn’t necessarily denote worse. Joby is still a player whose skill set fits well within the David Barnes’ spread offensive system and what Coach Barnes appears to want from his QB position.

Joby Jaggers has worked very hard for his opportunity, by all accounts, and is very deserving to get to lead this year’s team. He is a very capable athlete, and, incidentally, not a bad baseball player himself. Joby plays on the HS Baseball Team too, positioned in the Outfield behind Shane Burns, when Burns pitches. To be fair though, playing the outfield behind Burns when he’s on the mound with his 0.50 ERA is similar to being employed as the Maytag Repairman, for those of you old enough for that reference. Kentucky Prep Gridiron predicts Jaggers will take the reins of the Tiger offense and lead them effectively. Joby’s worked hard, he’s led a team before to post-season success, even if in middle school. Joby’s an athlete with a good skill set for what Coach Barnes will ask of him and Coach Barnes’ system has produced a long line of outstanding quarterbacks. It would be wrong to assume Jaggers won’t just continue the tradition of fine play at the position.