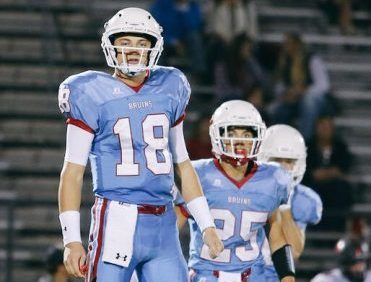 We have written about Jacob Buie twice previously, once in a feature (What KPG can do for your Son, May 29, 2017) and the other in the article we ran about the V7 Elite Combine Series. Jacob is a 6’5″, 205 pound, 2018 Quarterback with whom we, at Kentucky Prep Gridiron, fell in love watching him tryout for the V7 All-American Team when the Combine series rolled through Nashville, Tennessee. To recap, he make all the throws, he has good feet, he sets up well, has a high release point, releases it quickly, flips his hips well, steps down the hallway as he delivers, as QB coaches both teach and relish, and Jacob can really spin the sphere, indicating arm strength.  In short, he’s polished and talented.

Jacob’s first offer came by way of Eastern Illinois University, the QB University of both the Ohio Valley Conference and the Football Championship Series (FCS). The School in Charleston, Illinois has had the likes of Mike Shanahan, Sean Payton, Tony Romo and Jimmy Garoppolo all travel the path from EIU to the NFL. Well, now Jacob has gotten another offer and this one is from Southeast Missouri State University (SEMO). The Redhawks are also in the Ohio Valley Conference and open this coming fall at the University of Kansas with a date with the Dayton Flyers immediately following.

Now, schools will extend a ton of offers. I know it sounds good to be offered and makes for a fun Tweet, but the reality is there is a difference between a kid to whom a school has offered and one where the school will accept the kid’s commitment. Not only will both D-1 Schools which have offered Jacob accept his commitment, should he make it, the word around EIU is Buie is the primary target at the position and, upon his commitment, EIU won’t recruit another QB in the 2018 class. For SEMO’s part, I hear the Redhawks are really pushing for Buie’s commitment.

Without a doubt, Buie is blowing up on the recruiting front. He holds two offers now and the real kind. Schools in need of a QB with all the requisite tools and size might do well to turn attention to Jackson, Tennessee. What’s his connection to Kentucky you ask? Why is KPG following him? Western Kentucky University is recruiting him. Foreshadowing…maybe.