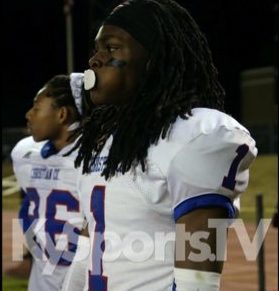 Cory Trice has released on social media he will continue his football career, after his senior season at Christian County High School, in the Big Ten Conference for the Purdue Boilermakers. The Big 10, which actually has 12 teams (go figure) is what is known as a Power 5 conference, for those not in the know. That is Big Boy Football.

Some of you may recall that I wrote about Trice on this site after his showing at the V7 Elite Combine Series. See, Dingle, Trice, Long, Coleman and Bland stud out @ V7 Elite Combine, April 30, 2017. As I reported following that Combine…as far as this analyst is concerned, there really weren’t two players who displayed their vast talents any more convincingly than Cory Trice, the Class of 2018, 6’4″ Safety for Christian County High School, or Justice Dingle, the 6’2″ 235 pound LB from Bowling Green High School.  I hate to say I told you so. Well, not really.

Trice has the frame colleges, on the big stage, covet. Trice has length, 6’4″ tall and an even longer wingspan, and he has hops exhibiting good hip explosion (roll basketball highlights now). Cory has the ability to open up and get on top of routes and the ability to use his quickness and good feet, normally exhibited by basketball players, to make up space underneath, where he can use his inordinately long arms to defend passes across the middle which cross his face. Unlike some back four players, Trice is also willing to come up and get involved in the run game. Trice is a sure tackler in the open field, which is good considering where he encounters offensive players, not missing the tackle is kind of important because he mans the last line of defense.

Coming into the Summer most of the questions about Trice have centered around a perception he lacked speed. With legs as long as his, that is a common misperception. Long-striders cover more ground with each stride giving the appearance they either aren’t running fast or playing all-out. Those questions have been answered this Summer as Trice has been consistently timed in the 4.5’s. With Trice’s height and wingspan, a 4.5 something 40 means he plays even faster. It is very difficult to drop a ball over 6’4″ Safeties running in the 4.5’s with long arms, trust me on this one. Trice is listed by CatsPause.com (Rivals) as the No. 7 recruit in Kentucky in the 2018 Class.

Commitments at this stage of the game rarely mean the journey has ended and a team like Purdue, who has secured a commitment at this stage, would be wise to keep recruiting any kid. I am sure the Boilermakers’ recruiting office and football program are even more aware of this than I. The foregoing phenomenon is especially true where the recruit continues to make visits to other schools. Purdue’s new pipeline into the Western Kentucky area and, particularly, Christian County High School, as seen with the addition of two players from off of CCHS’ team last year (Keyron Catlett and Coco Major), coupled with the indication Trice is shutting down any future visits, gives Kentucky Prep Gridiron the confidence to call this one done to the Boilermakers.

You might pay more attention, sports fans, to future articles as this won’t be the last feature written about the Colonels 2018 Class. Coach Lovelace’s squad is LOADED with Division I football talent this year. This year’s team is largely considered the most talent Coach Lovelace has had and KPG  is willing to bet it isn’t going unnoticed in the land of the Purples!