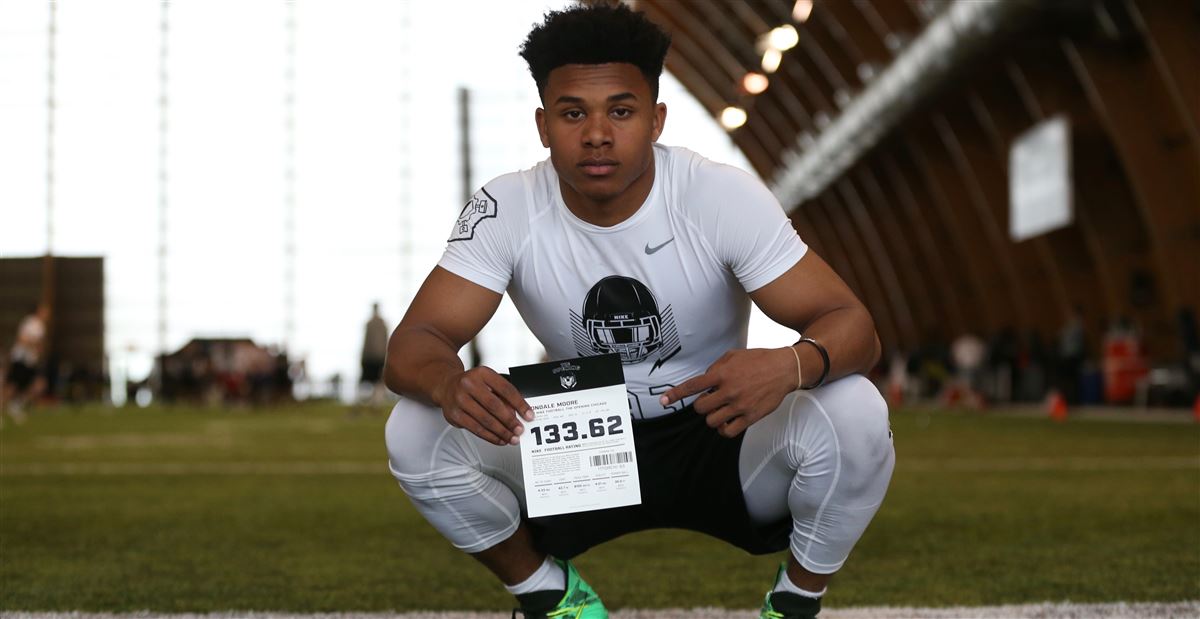 Louisville Trinity’s Rondale Moore is only 5’8.5″ tall. That’s the only place where he might be lacking. Of course, if you look at his National Top 100 ranking on 247Sports.com, the fact 247Sports has rated him the top prospect in the 2018 Class in Kentucky, and his offer list, which includes the likes of Kentucky, Ohio State, Penn. State, Texas and Michigan State, among many other suiters; it doesn’t appear his height is much of an impediment, at least not in the opinions which count. Why should it be?

Moore runs a 4.33 laser timed 40 yard dash, runs the pro-shuttle in a ridiculous 4.01 seconds, and has a Darrell Griffith type vertical leap measured at 42.70 inches.  Did you see what I did there?  Trinity’s in Louisville so I compared Rondale Moore to old-school basketball, U of L legend, Darrell Griffith. No accounting for clever.

It is being reported on 247Sports that Moore visited Texas over the weekend and the Longhorns are now the decided leader. Moore reports being blown away by Austin. I am sure both sides were equally impressed. After all, Rondale Moore, who works with Chris Vaughn at Aspirations Fitness can bench press over 300 pounds and squat 530 pounds. Not bad for someone weighing 174 pounds.

Folks, let Kentucky Prep Gridiron give you a little insight into how recruiting coordinators and college coaches think and for what they look in the way of corroboration.  I realize subscribers might wonder why we include some of the statistics we do. Here’s why. A player like Moore who reports the incredible speed and strength numbers he does is likely to be taken for a braggart, or someone prone to exaggerate. There exists raw data which tells us Moore is neither exaggerating nor a braggart and here is why. Moore, with an over 40 inch vertical leap and squatting 530 pounds has numbers commensurate to someone who would run a 4.3 in the 40 and a 4.01 pro shuttle. The numbers reported in the weight room match what you would expect of a player with his times. When you hear Moore has incredible make the tackler miss in the open field ability, it makes sense owing to his 4.01 pro-shuttle would validate a spacial quickness capable of making would-be tacklers miss in the open field.  The numbers we include in our articles may not mean much to you but they are important to college coaches out on the recruiting trail. They tell coaches that what they hear about Moore is reliable.  Believe me, the coaches out on the recruiting trail are fed a lot of the crap by High School Coaches hoping to get players recruited.

Last fall, Moore, a transfer from New Albany, Indiana,  was deemed ineligible by the KHSAA until the second round of the state playoffs because of his transfer. In only four games, Moore caught 20 passes for 464 yards and 9 touchdowns. 247Sports has reported Moore will make a college decision before the end of summer and doesn’t report he will make any additional visits. For all the instate college fans hoping to gain Moore’s pledge, this one seems done to the Longhorns.

There still is one final issue, however, and that is what in the world are the opponents on Coach Bob Beatty’s Shamrock schedule going to do with Moore and his teammates coming off the school’s 24th State Championship (Beaty has won 12 of those) and riding a 50 game win streak? One thing is for certain…they sure as Hell aren’t going to catch Rondale Moore.