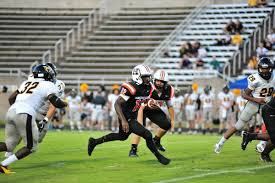 I saw something yesterday at Hoptown’s Spring Practice that will tighten up a lot of defensive coaches in class 4A’s district 1. It was definitely a sight for these sore eyes. I saw an apparently healthy, rehabbed, Jatorion Dillard participating in the seven’s portion of practice. At one point I was standing next to Craig the Silver Fox Clayton when Torion (as we refer to him) came flying across the middle of the field. AFI-KPG, Sophomore, All-State QB, Jay Bland rifled a pass over the middle of the field which Dillard plucked out of mid-air, without breaking stride or slowing in the least, like a neighborhood kid plucks a plum from a tree in your back yard garden. I looked at Coach Clayton and said, Man, have I missed seeing that. His response…Brother, you have no idea.

Now, I am sure Dillard isn’t 100 percent, and there are no plans for him to pad up until next Fall, just in time for the season to open. However, whatever percentage of Dillard was running routes in front on me yesterday was snagging passes on the Thornton practice field and separating from coverage like I remembered him from when he was healthy. He looked like the Dillard, to me, the coaches in District 1, last season, prognosticated would be the District’s Player of the Year, in spite of the fact (at the time) everyone assumed Jalen Johnson, a two-time, defending POY, was returning for his senior season. He looked like the Dillard whose team was preseason ranked number 4, last year. He looked like the Dillard whose team is preseason ranked number 1, this year, and largely because of his expected return.

Dillard is a 5-8, 185 pound, senior running back who, through his first two seasons playing in Marc Clark’s spread attack, which didn’t run the ball a lot, still managed nearly 1,500 yards rushing in two years. Most forecasters believed, under the Clayton power ground attack, Torion Dillard was set to gain northwards of 1,500 yards, last year. In the preseason scrimmage with both McCracken and Owensboro, his production warranted that belief against the class 6A and 5A powers.  Dillard’s running style reminds me of a young Mark Higgs who, coincidentally, played at Owensboro High School. Mark was, at least in HS, a 5-7, 175 pound, north/south, jump-cutter who left OHS the All-time leading rusher, in 1983, with 6,721 career yards, gaining 2,858 of those his senior season. He also scored 75 career TDs rushing before moving on to UK and then the NFL.

Dillard, who won’t approach that level of HS production (though, to be fair, Torion did miss the entire year, last year, and teams leaned more on running the football in 1983 than today), still, has a similar compact build,  power, explosion, and an unmatchable gear compared to his competition. Now, there is a saying that necessity is the mother of invention and when Torion went down last year, and Steven Cager, a.k.a. Shorty, decided (along with Jalen Johnson) to forego his senior year of football rather than adapt to a new offensive system, the Tigers were forced to throw some players directly into the fire and just go with it. One of those guys, Jordan Hopson, got valuable game experience and has developed into a real RB in his own right. The pair should give HHS a potent ground game to make the play-action more effective and create down-field opportunities in the passing game. It helps receivers get open when the QB play-fakes to a RB who has the attention of a defense’s back-end.

Now, Dillard isn’t the only Tiger set to return as Keone Mumford is getting off IR soon; as is Jaime Cooper-Roman. At the time both those players went down last season, they were considered the best players the Tigers had at their respective position groups. Again, their missing the majority of last season forced the Tigers to play young guys who now, because of their live varsity game reps, are no longer young guys. Oh, the Tigers are going to be good. With a healthy Torion Dillard back to lead what can be a very potent ground game, they are going to be very good. He may not be game ready right now, but whatever he is…looked damn good to me!