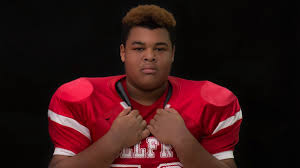 The Kentucky Future Stars are headed to Louisville, Kentucky where, if tradition holds, we should see some filthy speed coming out of the Derby City. The western Kentucky combine, which didn’t posses the speed we will see in Louisville, had a very nice array of bigs as we reported. One of the stars coming out of that combine was the top interior defensive lineman in Kentucky’s class of 2022, Jacoby Thornsbury. We have before mentioned that we got to see Thornsbury matched up with the top interior OL prospect in Kentucky’s 2022 Class, William Hughes from Hopkinsville, and the two of them battled like Paul Bunyan versus Babe, the blue Ox.

Thornsbury is from Belfry, Kentucky and is 5-10 inches tall and weighs in at a robust, but powerful, 270 pounds. We were able to reach Team Kentucky’s FBU head coach, G.J. Wooldridge, who will be on the Future Stars coaching staff again this year, but in what capacity and for which team (7th or 8th) we don’t know, and Coach Wooldridge had this to say about his former player…Jacoby plays hard and is a big body with a high motor. Thornsbury is a coach’s player, does all the right things, and, perhaps most importantly, holds his teammates accountable.

About nine months or so ago, one of the premier publications covering middle school and youth football nationally, Youth1 published an article on Jacoby. The article has been, for your ease and convenience, linked here. In the article, Youth1 called Thornsbury…a versatile talented football player…[whose] main position is defensive lineman, but he can also contribute as an offensive lineman at the tackle position. The article correctly noted his being a 2X Diamond All-American and a 2X FBU Top Gun selection who also was chosen and participated in the Legends All-American Game and the DMAXX All-American Game.

Needless to say, Jacoby Thornsbury (IMG_1834) is one of the more decorated middle school players to come through the commonwealth of Kentucky. That is not to say he doesn’t have anywhere for his game to improve, but anywhere his game may be deficient (like for instance, he isn’t the fast D-lineman, top-end, I have ever seen), that deficiency is attributable to his being young and will be shortly remedied as he grows, matures, and weight trains as a part of the high school program. Thornsbury is a kid who would start, day one, for a lot of high schools but he doesn’t attend a lot of high schools, he attends Belfry High School, which is well-stocked on both sides of the line of scrimmage. That won’t stop Thornsbury from probably starting JV as a freshman this upcoming season, and having a shot to letter on the Varsity team as Belfry will be blowing out a lot of people anyway.

The last thing I want to say about this fantastic kid, who is one of my personal favorites anywhere within the commonwealth is that Thornsbury is a personable,  polite, pleasure in whose company to be whose country accent catches one a little off-guard. What the heck, he is from the mountains after all. Jacoby Thornsbury will be a thorn in Tennessee’s side as they will have to account for him up-front and KPGFootball believes Thornsbury will spend considerable time in the Tennessee backfield when the annual Tennessee-Kentucky Future Stars Classic is played at Georgetown College this summer.

This is Fletcher Long, reporting for KPGFootball reminding ballers all over Kentucky to PLAY THROUGH THE WHISTLE!