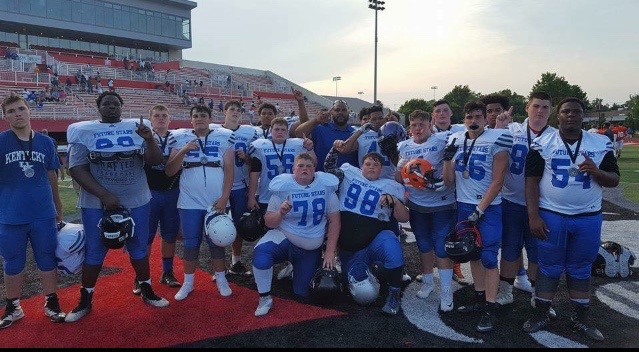 Got a phone call from a father of a very prominent and accomplished young player whose son, this past Fall, just completed his freshman year in high school. He told me about a conversation he had with the varsity football coach prior to the season. So, the coach calls me in his office for a face to face and said, “you need to understand something sir, really quick; I don’t play freshmen on my varsity.” The father said, Yessir, coach. The coach reiterated, I’m serious, he will play freshman football and maybe some junior varsity. Don’t be looking for anything other than that. If he is permitted to dress varsity it will be miraculous. The father said for the second time, Yessir. After replaying the conference for me, I asked this father how his son did this past season. He told me he started every meaning varsity snap, played one quarter of junior varsity, and not a single second on the freshman squad. Isn’t that amazing? Well, it depends on the freshman.

As a writer for KPGFootball, I tell kids all the time there are no freshmen, sophomores, juniors, or seniors on a varsity, high school, football team anymore. There are only players. If you get in the weight room and make a serious commitment to preparing yourself for the physical aspect of the game, and work hard to learn what is mentally required of you, you will play varsity if the varsity is a better team with you on the field. In the end, the decision as to whether you play varsity, or some lower level in the program, isn’t the coach’s. It’s really yours. These coaches want to win football games. If there is an older player and younger player and the skill difference is a toss-up, it behooves the staff to play the player it has more time to develop, over the player the program is losing at the end of the year. Work hard, and you will play. Quit working, and you will be replaced by someone coming up from behind you who is hungrier.

Last season, Christian Academy of Louisville made it all the way to the State Semis with a freshman as its leading rusher and another freshman at fullback, blocking for his twin brother and playing LB on defense. When the Babin twins (Brandt and Braeden) went straight into the starting line-up at one of Kentucky’s premier programs, no one was surprised. We watched them play for Team Kentucky in middle school. It was apparent to anyone watching them play they weren’t just future stars but present stars. Last season, Austin Gough led the class 5A Owensboro Red Devils in tackles as a freshman as did Justice Thompson for the class 6A Ballard Bruins. That was a shock for exactly no one who knew the first thing about either player. They’re pictured to the left of the first paragraph. Be honest, would you have played them, though they were merely freshmen, on your HS team? Of course, so would have I.

We are coming up on what amounts to a critical offseason for the upper echelon of rising freshmen players. The type of players who make Team Kentucky Future Stars, for instance; the kind of 8th graders like Jake Lewis from Paintsville, who is already in the weight room getting prepared for action, Jacoby Thornsbury from Belfry, Kentucky, or even Will Hughes from Hopkinsville, all three of whom have opportunities to follow in the path blazed by former members of the #Brotherhood (Team Kentucky players), William Long, Austin Gough, Justice Thompson, LeVell Wright, and EJ Austin, just to name a few. This is provided Hughes, Lewis, and Thornsbury put in the offseason work the trailblazers did and report to summer workouts looking and playing like the trailblazers. Whether any HS coach wants to concede this; this isn’t the high school football of old. Look at the featured photograph of the Team Kentucky lines of scrimmage from last year’s Future Stars’ Classic and, honestly, answer this question…how many 8th graders do you remember coming up looking like any kid pictured in the photograph? When I was a middle school player, we didn’t have Team Kentucky Future Stars, or Team Kentucky FBU, middle school All-American teams, middle school combines, or on-line publications which covered players in middle school. These kids have more opportunity to develop, more resources, and way more exposure. Hell, they have their own All-State Football Team.

In a nutshell, no one can tell a rising freshman, for sure, whether he will be a freshman, junior varsity, or even varsity regular during his 9th grade season. All of that depends on a variety of factors over which the individual player almost exclusively exercises control, provided he demonstrates the requisite level of commitment. Many of you will be assured the program you are entering is too prestigious and established to ever play a freshman on the varsity. I would suggest you let that motivate you to make a liar of the person doing the telling. First and foremost, high school coaches want to win. Secondly, they are all creatures of habit and are easily impressed with power, speed, agility, and explosion. All four of those attributes can be greatly improved by someone committed to the development of the four. So, when you are assured you won’t play as a freshman, inside your own head, tell yourself what the freshmen, above discussed, must have told themselves…you may not play freshmen, coach, but you WILL play this freshman. By the time I get here in August, I will probably be, physically, either a sophomore or junior anyway.

This is Fletcher Long reporting for KPGFootball reminding you to get to work and PLAY THROUGH THE WHISTLE!