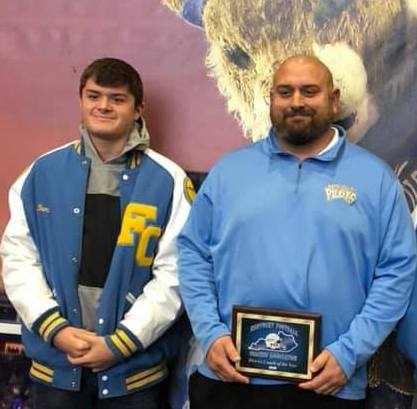 One may be wondering why we have pictured 2021 Broc Bridges, TE/DE, next to coach James Bridges in the photograph featured with this article. Sure, they are father/son and player/coach, but that isn’t the reason. Sure, Broc Bridges was honorably mentioned all-WKC (Western Kentucky Conference) and James Bridges was the WKC, District 1, Coach of the Year, but that wasn’t the reason either. So, what was the reason?

James Bridges, a former Fulton County Pilot who matriculated to Murray State University and started multiple years there along its defensive front, is 6-3 inches tall. We don’t want him telling our weights so we won’t give his. His son is demonstrably taller and thicker, right now, than when pictured, and is presently a half-inch or so taller than Coach. The purpose of the picture was to establish his height-range.

Broc’s mother, also tall, helps form the genetic foundation for the proposition this kid isn’t done growing. His frame will get even longer and, certainly, thicker. The kid’s agility, quickness, and straight-line speed has been on full display at BAGOS Elite-Sevens’ practice for even the remotely curious.

Bridges has filled out since the season’s cessation and is now up to 200 pounds. Much to the chagrin of the varsity basketball coach at Fulton County, he skipped basketball season to work on his strength, power, explosion, and conditioning. Bridges played in 2018 at both TE and DE, with the TE deployment being principally a 6th-OL for an offense heavily weighted toward the ground game.

Next year, Bridges will slide out wide to play receiver for the Pilots. However, this move is largely to showcase his hands and mobility. As far as next-level deployment, KPGFootball believes this kid is a Division I, FCS or FBS-level, TE/DE prospect. If you look at his highlights you will see he can certainly set the edge for you defensively as a DE.

Over his sophomore season, Bridges caught 7 passes at TE for 85 yards and 2 scores. While those numbers don’t sound awe-inspiring, the entire team only had 9 TD receptions in 2018 while catching 39 balls as a team. Bridges was its third-leading receiver.

Added to his duties catching passes and TDs, Bridges was the 6th-OL on a front which paved the way for a 1,648-yard ground gainer in Caleb Kimble and ran for 2,616 yards as a team. All of this was done in only 11 outings.

While deployed at DE, Bridges was the team’s second leading tackler at 58 total hits. Bridges also registered 9 tackles behind the line of scrimmage and posted 1 and 1/2 of the team’s 9 QB sacks on the year. Before we forget, the play-making sophomore recovered a pair of fumbles.

We are pretty excited about Fulton County’s prospects upcoming in 2019. That excitement is centered around there being a core of play-makers returning from off the 2018 football team which finished 5-6 but dropped a one-pointer to Russellville in Russellville and lost to Ballard Memorial, in overtime, on the road. They were really close to 7-4 with much of the talent being in the junior and sophomore classes.

In 2019, the Pilots have Caleb Kimble, who’s been offered by UTMartin, back for his senior year and Broc Bridges is starting to fill out his now 6-3.5, 200-pound frame and demonstrate the type explosion, power, and strength likely to vault him up the 2021 KY prospects list. In addition to all of this, Coach Bridges has an incoming group of 8th-graders who went 6-1 and have several pieces likely to challenge older players for Friday-night PT.

KPGFootball would recommend you continue to monitor Broc Bridges as he plays Sevens’ ball (7 on 7) for BAGOS this off-season. One might monitor his offseason weight, strength, explosion, and power gains in the strength & conditioning program at Fulton County. If you like frames, for our money regarding 2021 TE/DE-types, you won’t see much better than Broc Bridges this side of Anderson County’s Darion Dearinger.