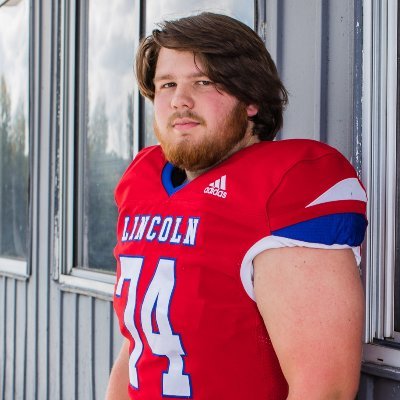 Big offensive tackle getting it done for Coach Spencer Crutchfield’s Patriots (4A, District 7)

They’ve been known to play a little football around Lincoln County, Kentucky. You can ask the guys around the 7th-district and they will readily support the Patriots will knock off your socks.

They run the football very well. The Class 4A perennial powerhouse got down-hill in a hurry in 2020, pandemic or no pandemic.

The Patriots, behind their hulking, 290-pounder at tackle, Holden Stamper, ran for 279.4-yards a night and 2,525-yards on the year in 9-games. The Patriots scored 34-rushing TDs a year ago in 348-rushing attempts.

That is finding pay dirt every tenth carry. That is averaging 7.3 or so yards an attempt. The Patriots, in the same district with Wayne County, Knox Central, and Corbin, ain’t exactly strolling down the beach on Friday nights.

Holden Stamper is turning some heads with his play and physical prowess. The fact he has a 4.0 GPA, to go with his on-field aggression and ability, means he will have opportunities to play in college many kids won’t. Hard to play college football at an elite academic institution where the football staff can’t get you by the admission’s committee.

That is true anywhere. It’s called being a student-athlete.

The word, “student” gets first billing for a reason. These are institutions for higher learning, not “meat markets.”

This kid is a mauler. His first two steps are powerful, heavy, and get the studs in the ground immediately. His elbows are tight, his hands are inside the shoulders, and once he clamps on and your playing DT you are going for a ride my friend. That ride doesn’t stop until you are driven through the ground or the whistle blows.

This kid plays the position with a mean-spirited disposition. As a result, Holden makes plenty of what we term around KPGFootball‘s homes offices as, “turf deposits.”

There are some really fine programs looking at this prospect. Some of these programs have challenging academic curricula and prestigious academic reputations.

This is a kid with a D-1 skill set but the grades, ambition, and intellectual industry to suit his ending up literally anywhere he chooses. Where that is exactly will be fun to monitor. Wherever that ends up being, that program will be getting one tremendous lineman well suited for the college game.