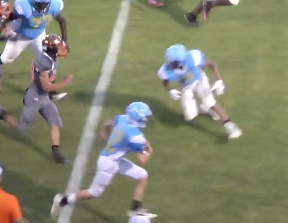 Don’t know whether you have seen James Bridges walking around lately, but he is smiling like a Cheshire cat. It’ almost like he knows something.

Sure, he has a superstar running back returning in Caleb Kimble for his senior year. Sure, he has one of the rising, Class of 2021, stars returning in 6-3, 200 pound WR/DE/TE, Broc Bridges. Yeah, he has a stud running-back entering the 9th grade this Fall, in Class of 2023, Jashon Jones, and another stud running-back coming up the Fall after next, in 8th grader (to be), Class of 2024, Felix Jackson. Bridges, truthfully, has lots of reasons to face the dawn with both excitement and expectation.

All of the above aside, nothing serves as a tonic for a high school football coach any more potent than being gifted a star QB to serve as the future straw which will stir the offense’s drink. That’s exactly what Coach Bridges has coming up from the “Jr. Pilot” program in arriving freshman, Max Gibbs (2023).

Now, not many people know what we are about to relate, but, after all, we are the quintessential source for middle-school football information. The Fulton County Middle School Jr. Pilots only lost one game in 2018 while winning its other 6. They were T-O-U-G-H, tough. At the fore, forming the core of that ball-club, was its 5-10, 150 pound, dual-threat QB, Max Gibbs.

Gibbs, highlights linked here, has a rocket for a right-arm and the poise, athleticism, speed, and quickness to get outside the pocket and break-down a defense with his feet. Gibbs is the kind of QB-prospect who just might find his way on the field on Friday nights fairly early in his freshman season.

Max Gibbs, who is equally a star on the baseball diamond, has been invited to participate in one of the most prestigious QB-challenge events in the country. Max Gibbs is firmly on the KPGFootball watch-list going forward for the freshman All-State team. So, as you can tell, living in one of the more remote areas of the Commonwealth hasn’t kept the word from getting out on this young hot-shot.

Yessir, old Coach Bridges is looking pretty sure of himself, strutting around the old stomping grounds where he was once a star player and now finds himself a star high-school head football coach. Truthfully, we can’t fathom why he shouldn’t be excited about his ball-club’s future prospects. We know this…if he isn’t excited about the Pilot football program’s direction heading into 2019, then, perhaps, he will permit KPGFootball to be excited on his behalf.