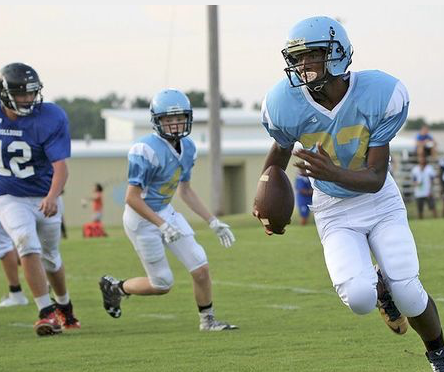 The Junior Pilots from Fulton County had a tremendous year in 2018 in only losing one game against 6 triumphs. When you have a quarter-back like Max Gibbs and a running back like J’Shon Jones, on any eighth-grade football team, that team is likely to meet with success.

Don’t worry Fulton County-Junior Pilot fans, the cupboard isn’t barren just yet. The Middle School is returning a kid who mightily contributed to the middle school varsity a year ago, though only in 7th grade at the time, and who can flat tote the mail, if you catch our drift. Meet Class of 2024, RB, Felix Jackson.

Jackson, whose photo is above appearing to the left of the paragraph immediately preceding this one, is a long and lean, greyhound-like running back who uses his inordinate speed to press the edge. Jackson is working hard in the offseason weight-room and has been recently awarded Lifter of the Week by the HS varsity head-man, James Bridges. This means, for those middle school players charged with tackling him, Jackson may be squaring you up next season as opposed to angling toward the safety of the sidelines.

It is very rare for middle school kids to get any work at all in strength and conditioning. There is a myth abound that middle-school athletes who lift may stunt their growth. This is equally true as the old wives-tale directing one to not breathe in when passing a cemetery for fear one will breathe-in the spirit of a recently departed.

Middle-school footballers who spend just a minimal amount of time in offseason weight-training find themselves light-years ahead of both opponents and rivals. In many instances it creates a chasmic, unbridgeable separation between the players that work and the players who don’t. That gap is often never bridged from middle school all the way through a player’s high school playing career. The players who enters high school ahead may stay ahead while the players who enter high school behind may continue in that station.

Well, Felix Jackson is putting in the offseason effort which will catapult his performance to the very top echelon of the Class of 2024 at the RB position. He had a super year in 2018 but his 2019 performance should be quite the show-stopper.

As the owners of the only Kentucky Middle School All-State football team in Kentucky’s history, we wrote this article as a message to Felix. The message…ball out young man! We’re watching your every move. We fully expect to be talking about you at the conclusion of 2019 when we convene our selection committee to choose our All-State team.