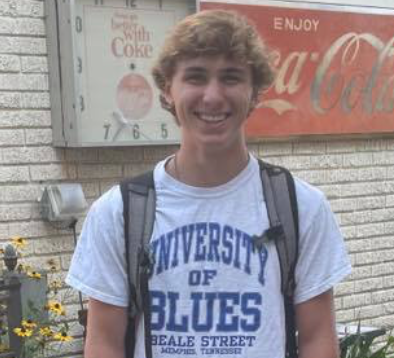 Not everyone can handle being the “little-brother” of a former bone fide, high-school superstar. Especially when your freshman year follows on the heals of big brother’s matriculation to play college football at UK; when the two of you (big brother and little brother), play the same positions; and when “big brother” left the team you’re entering the team’s all-time, career tackles leader.

Under those circumstances, a lot of little brothers would try to distance themselves from the elder. Ethan Gough, a.k.a. “Big E,” has chosen to embrace it. He even wears the same number in tribute.

We’re two games into Big E’s freshman campaign. He has gotten varsity burn in both of the games so far and has two tackles and a QB-sack to his credit.

Among ’25 linebackers playing football on one of 5A’s most talented rosters, that level of early contribution from a freshman is remarkable. Ethan also plays RB.

Like we said above, “Big E” is wearing the same number his brother wore at Owensboro “Senior.” I am sure Red Devil fans find that comforting having grown accustomed to having a “26” patrolling its defensive second level for the four years leading up to this one.

If Ethan were ten years younger than Austin, instead of entering HS the year after Austin graduated, the number “26” might not have been available. It is likely headed for “retirement” in the not too distant future.

If the first Gough wasn’t going to “retire” it, then this younger version certainly will. Ethan Gough will weave his own narrative into its fabric, on that you can wager.

Following in Austin’s footsteps will be daunting. Austin had 82-tackles as a freshman, made the KPGFootball Freshman All-State first-team, and was selected an AP All-Stater three years straight. However, all of that being said, if there is anyone on the Red Devil roster up for the attempt of filling the jersey and further honoring the number, it is Ethan Gough.

Having covered Ethan since his being a star middle-school football player, the younger Gough has many similarities to his older brother. Ethan gets down hill and attacks ball carriers just like Austin. Ethan is athletic, fast, quick, and explosive like the elder. Ethan works hard to be in “game-shape,” and comes up big when the team needs a play, just like Austin.

Now before everyone gets all crazy and starts spouting, “Yeah, but will Ethan record 82-tackles his freshman year like big brother(?)” there’s a few observations which should be made. First, this edition of the Red Devils is much more talented, with more upperclassman dotting the lineup, than the team Austin joined in 2017.

Austin’s freshman year the Red Devils finished 4-7 overall, 1-5 in its Region, and 1-3 in its district. This team returns almost completely intact from a run to the 5A Championship game, is coming off a 12-1 season, and has a Power 5, FBS commitment at QB (Gavin Wimsatt, Rutgers) and has more than a smattering of FBS/FCS, Division I prospects holding offers up and down its present-day, starting lineup.

Austin’s ’17 Red Devils needed a freshman to come in and help the program right its ship and make those 82-tackles. This edition, the ’21 model Ethan has joined, really doesn’t need that kind of play from the younger Gough or any other freshman for that matter.

Heathy programs don’t really need to start freshman football players under normal circumstances. If you see a freshman starting on a 5A football team, that tells an observer something standing alone.

Resulting from the health of the roster, these Red Devils have excellent defensive, second-level talent older and established to position ahead of Ethan. Ethan’s getting the play he is drawing, in this defense with its personnel, is a testament to Ethan’s abilities, standing alone. His play so far on this type team defines Ethan as being among the best ’25 has to offer from its bevy of freshman LBers competing around Kentucky in its six (6) classifications.

I don’t think the question should be will Ethan be as good as Austin was? It would appear to me the more legitimate concern for Red Devil opponents should be, Oh my God, what if he’s even better?