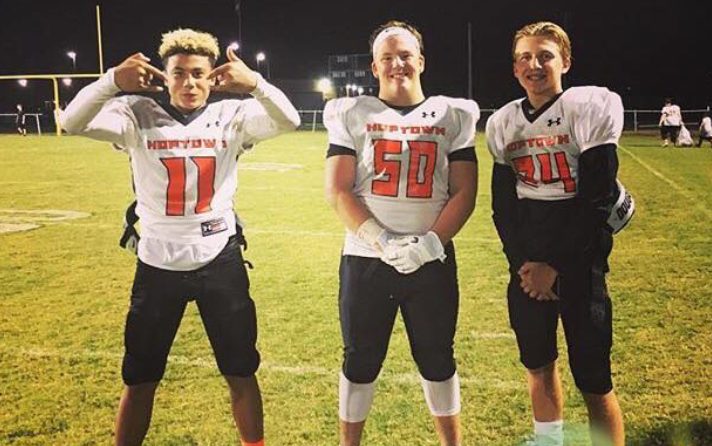 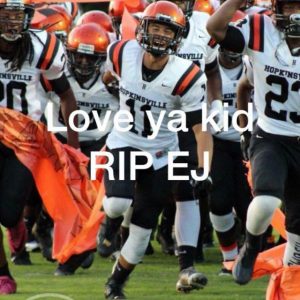 I was not there when Elijah was Christened with the name of one of the most famous of all of God’s servants. I can only imagine he was so named in reference to the Elijah whose story is first told, then re-told, through out the Old and New Testaments of The Bible.

The story of Elijah is most prominently told in a book entitled Kings. In Kings we find the following:

Then it happened, as they continued on and talked, that suddenly a chariot of fire appeared with horses of fire, and separated the two of them (Elijah and Elisha); and Elijah went up by a whirlwind into heaven. And Elisha saw it, and he cried out, “My father, my father, the chariot of Israel and its horsemen!” So he saw him no more. And he took hold of his own clothes and tore them into two pieces. He also took up the mantle of Elijah that had fallen from him, and went back and stood by the bank of the Jordan. 2 Kings 11-13.

I thought of that rather poignant passage yesterday as probably the finest football player I have ever had the privilege of coaching was taken from me as if by a whirlwind into heaven. I wondered, like Elisha did for the Biblical Elijah, just who would take up my Elijah’s mantle?

There was so much more to EJ Austin than his merely being a football player, yet let me assure you he was a terrific football player. He was a fine student, a wonderful citizen, a tremendous friend to my children, my wife, and me.

He stayed at my house, he met my closest friends, and even I can’t imagine or describe the feelings which are being presently felt by Coaches Maurice Jesse or Carl Banks, who didn’t just coach him in Middle School but all the way through the Junior Pro Football ranks. Then there is my friend Derrell Johnson who shared with me just last night that EJ was probably the youngest former member of the Attucks Wolfpack AAU basketball program.

To his Mother, Grand-parents, two sisters, a half-sister and a brother I don’t have comfort for any of them or I would surely give it. I am a huge fan of poet A.E. Housman who wrote in a book entitled A Shropshire Lad (1896) a poem entitled To an Athlete Dying Young many believe on the occasion of the death of his close friend, Adalbert Jackson, who was also taken from the world too early during The Boar Wars.

The Time you won your town the race,/We chaired you through the marketplace; Man and boy stood cheering by,/As we brought you shoulder-high./To-day, the road all runners come,/Shoulder-high we bring you home,/And set you at your threshold down,/Townsman of a stiller town./Smart lad, to slip betimes away/From fields where glory does not stay/And early though the laurel grows/It withers quicker than the rose./Eyes the shady night has shut/Cannot see the record cut./And silence sounds no worse than cheers/After earth has stopped the ears:/Now you will not swell the rout/Of lads that wore their honours out,/Runers whom renown outran/And the name died before the man./So set, before its echoes fade./The fleet foot on the sill of shade,/And hold to the low lintel up/The still-defended challenge-cup./And round that early-laureled head/Will flock to gaze the strengthless dead,/And find unwithered on its curls/The garland briefer than a girl’s.

EJ Austin led the HMS Tigers Football Team to an unprecedented 12-1 record in 2016, a Region I Championship, and narrow defeat in the State Semi-finals to the eventual champion, TK Stone, 38-36. The game, which has been viewed thousands of times, YouTube, (State semi-final game), was viewed again by my sons, William, Jack Whaley, and me, last night.

This time, we didn’t care the brilliant and courageous, last minute comeback, fell just short of victory. We all just needed to see him on his stage, in his element, as resplendent as we all remembered, just one more time. We needed to revel in the brilliance about which the TV announcers on PrepSpin.com couldn’t stop remarking.

We needed to be amazed, once again, with his ingenuity, his grace, his poise. We wanted, once more, to be wowed by his athletic prowess and genius escapes from pressure, as he had accomplished such feats for all to see for years previous.

For any Hopkinsvillian who had the chance to see EJ Austin on a football field, and passed, I can only imagine your regret. Last night on YouTube, we watched, once more, The Time (EJ) won (his) town the race,…symbolically if not actually.

I am going to borrow from the Athenian, Menander (ca. 342–291 BC), and I am going to change the sentiment somewhat because Menander was a pagan. Billy Joel borrowed the same sentiment in a popular song about a girl named Virginia and I am told the sentiment has been part of Dominican theology from its inception.

He whom [God] loves dies young. George Gordon Byron (a.k.a. Lord Byron) – the greatest Romantic “hero” – gave clearest voice to the idea, linking it most firmly with the ancient tradition and also reaffirming it as a model and an inspiration for the future, right up to our own time.

Happy they,
Thrice fortunate who of that fragile mould,
The precious porcelain of human clay,
Break with the first fall. They can ne’er behold
The long year linked with heavy day on day
And all which must be borne and never told,
While life’s strange principle will often lie
Deepest in those who long the most to die.

‘Whom the gods love, die young’ was said of yore,
And many deaths do they escape by this:
The death of friends and that which slays even more,
The death of friendship, love, youth, all that is,
Except mere breath. And since the silent shore
Awaits at last even those whom longest miss
The old archer’s shafts, perhaps the early grave,
Which men weep over, may be meant to save.

So, where does that leave us, the heavy-hearted, broken, family, or extended family, of a teammate, brother, friend, son, grandson? How does any of this comfort us?

Well, it doesn’t, I am afraid. I can’t give EJ back to all of us, though I certainly would if I were able.

I believe in a God who loves us. Some intellectuals would note this as an indication of my being simple or dull-witted, but I do.

I believe EJ is in a better place with people, who have themselves gone on before him. I believe they will both love and gladly welcome EJ into their warm and loving society.

I believe he is in the presence of the Almighty now and is being loved and cared for more than we could ever either replicate or conceive. I hope Lord Byron is right and…since the silent shore/Awaits at least even those whom longest miss/The old archer’s shafts, perhaps the early grave,/Which men weep over, may be meant to save.

There are some very definite things I can say. I will never get over the hurt I feel for this senseless tragedy and a part of me has now died too, but that can be said about the many tragedies I have before experienced over 49 years of life, and there have been too many.

All of you reading this can say the same, though it may be about an altogether different tragedy. I can also say EJ Austin was the best freshman football player, playing Varsity football, I have ever witnessed.

I can also say with some surety that, if they play the game of football where EJ is, and if score is kept and the team choosing wants to win; it would be exceedingly wise and this author’s recommendation that team select, EJ Austin for its team. After all, this newest arrival will be one of the more dynamic athletes joining heaven’s pantheon of Angels on either this or any other day.

This is Fletcher Long reporting for Kentucky Prep Gridiron reminding his greatest player for the last time to PLAY THROUGH THE WHISTLE!