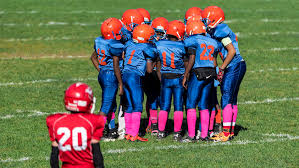 At one time I was on the Board of Directors of the Clarksville (TN) Football Playmakers Academy. We had many players matriculate through that organization to play in College on Saturdays, and a few went onto the NFL to play on Sundays. In our first class, we had Jalen Reeves-Maybin, now with the Detroit Lions, Maleek Hall, who was all-conference DB at Tennessee Tech, Warwick Marsh, who played at Arkansas State, just to name a few. I fondly remember Malcolm Perry, who is starring, right now, for the Naval Academy. At one time, it was widely believed that, pretty much, any player worth his salt, in Clarksville, worked out offseason with us at CFPA. It not only was genius, but it greatly benefitted both the young athlete and the High School programs for whom they played, as the programs got players with both football IQ and skills regularly pumped into their teams. I remember when I coached in the youth league in Clarksville, Tennessee. High School Coaches complained we were sending them unskilled players whom they were required to teach as opposed to coach. Theses coaches said they had to spend too much time teaching basic football skills and not enough time installing scheme. Ninth grade players should know what a 1 technique is, how to either play or recognize Cover 2, how to hand-off a football to a running back, and, if playing RB, how take a hand-off and safely transition the ball to high and tight. There are basic skills a player should be able to perform in the game of football by the time they arrive in High School.

Many of you know that, in addition to writing for Kentucky Prep Gridiron, I coach middle and high school football on a volunteer basis. A colleague of mine related to me a story where he was installing a student body right sweep which was difficult for opposing LBs to recognize because it was a clandestine way to align off-balanced to one side and disguise it as being in a pass set. Anyway, this coach was getting ready for a game just this past Monday and wanted to run the play during the game. Surely, an 8th grade football team could install one freaking play, right!? So the coach tells me his QB can’t toss a ball to the RB, something for which the play called. I mean the kid can throw it 50 yards but can’t toss it, accurately, nine feet. According to my friend, the player looked at him and said, Coach, I just can’t make that toss, I’ve never before done it. Well, it really shocked me. There is way more to playing Quarterback than throwing a forward pass. QBs have to be able to take a snap from under center, either open up or reverse out to hand off the football. QBs should be able to either toss or pitch the ball to a RB, should be able to drop 3, 5, and 7 steps, set up, and throw the ball. QBs have to know how to roll and square up and deliver a football with their shoulders square and while attacking the line and not fading backward. These are routine, football 101, type skills we all learned back in the day in Junior Pro Football. Of course, our Jr. Pro football coaches were required to have a background in football and weren’t just babysitting us.

If this sounds like an indictment of the present status of Jr. Pro Football than good; that is exactly what it is meant to be. Finding the best 9 year old athlete in town and then running him wide is not coaching football. Particularly where every other kid on the team can’t get in a stance or line up correctly. You may be winning games on Saturday morning but the kids themselves are all losing, including the nine year old superstar who will, someday soon, encounter DEs and OLBs faster than he. Those TD runs will turn into 7 yard losses before you know it. Hey Coach, the RB might need to learn to run between the tackles, get his team 7 yards, square up and punish a tackler and not just rely on flanking him. The Offensive Linemen, and I am just spiff balling here, might need to learn to get in a stance and do more than stand straight up and watch the play unfold before their very eyes from the best free seat in the house.  Just saying!

All of this aside, I happen to know there is a Football Academy coming to Western Kentucky this offseason. I know who will be teaching there and I know what will be taught. It will be offered to the best young football players in the area and will be by invitation. It will greatly improve the quality of football skill in the region and, in short order, make for higher quality high school football being played by the players who utilize the resource. This program has worked wonders before, I have seen it first hand. When formed, it will be announced only on Kentucky Prep Gridiron, so, if you want your son to be involved offseason with this training, it would be wise to subscribe to us now. The details concerning applying for the program with the goal toward being selected to participate will be protected content on this site which means it will only be for our subscribers.  We have got to get serious about teaching kids the fundamentals of the game of football. Whether you wish to believe it or not, kids in this area both need and greatly benefit from the opportunities a free education provides for those lucky enough to get to continue their playing careers on into college.