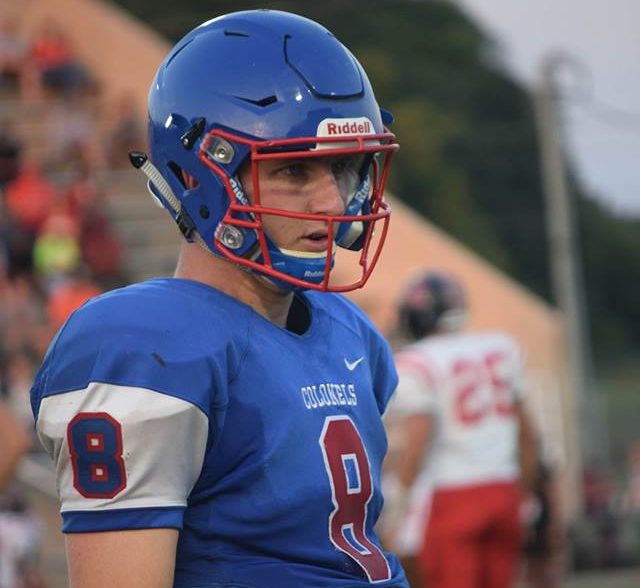 I know I have before written about Kolbe Langhi. See, Christian County’s Kolbe Langhi, Aces the Eye-Test, August 3, 2017. You may remember in that previous article I predicted, Kentucky Prep Gridiron believes this is another player in the Commonwealth who would be much more highly prized if he had grown up in another State…Kolbe Langhi will leave Christian County High School having passed for over 10,000 career yards. Kolbe Langhi will pass Keith Tandy’s mark of 90 career passing TDs. Kolbe Langhi will play college football and blossom into a pro prospect, at what position we cannot confess to know. As the season has progressed, and now that we are six games deep for Christian County, which is 6-0 by the way, I am not backing off any of these predictions. However, Kolbe Langhi, both this year and thus far, has shown an aspect to his game which makes him an even more prized prospect at QB, or any other position I might add, than even I realized coming into the season.

There is an it factor for football players which stat lines and milestones poorly annotate much of the time. For instance, the most famous of Paul Bear Bryant’s Junction Boys at Texas A&M University, who would become Bryant’s only Heisman Trophy Winner was John David Crow. In Crow’s Heisman season, he rushed for 562 yards and intercepted 5 passes. However, that didn’t stop Coach Bryant from famously remarking about Crow in 1957 that if he didn’t get awarded the Heisman...then they ought to quit giving it. After finishing his playing career in college, Crow was taken very early in the 1958 NFL Draft by the old Chicago Cardinals and played 11 NFL seasons, making the Pro-Bowl four of those years. What made Crow who he was, and why Kolbe Langhi can’t be reduced to some statistic, is something else Bryant allegedly once said about his All-American which fully demonstrated the concept of a football it factor. Though I can’t find it recorded, it has often been said Bryant told anyone who would listen about John David Crow that…if Crow’s team needed five yards for a first down, Crow would gain six. Kolbe Langhi is starting to remind us at Kentucky Prep Gridiron, and other onlookers, a bit of the late, great John David Crow. Kolbe Langhi, all season, and particularly against Owensboro High School, had it. Langhi is getting his team 6 yards when it needs 5, every time, and that is why they have yet to lose, with losing not looking likely going forward, at least until the playoffs.

Kolbe Langhi, in the Colonels win at Owensboro 48-27, completed 11 of 14 passes for 143 yards and two scores. Kolbe, in a skill he has before exhibited, also carried the ball 26 times for another 123 yards on the ground and 4 rushing TDs. If that stat line doesn’t elicit Crowian qualities, then perhaps I don’t know what it even is. We were able to catch up with Langhi’s QB coach at Christian County High School, Blake Ladson, who told us that Kolbe does an excellent job of taking what the defense gives him. Against Owensboro he accepted the challenge of running the ball and made great throws when the opportunity presented. Pretty clear in an age where dual threat QBs are being more and more highly prized, that Langhi is exhibiting he is truly a threat in both the throw and run games. What is terrifying the rest of 5A, District 1, in the Commonwealth of Kentucky is that the Colonels haven’t played a complete game yet, are un-defeated, aren’t likely to lose in the regular season, and are getting better. I can’t imagine what it will take to beat Christian County when they put a complete game together. There are a lot of teams out there hoping it doesn’t happen the night its their turn to attempt the task.

In short, borrowing from what Bryant said in 1957 about whether John David Crow should win the Heisman, and changing it a little; if Kolbe Langhi isn’t a college football player, perhaps they should just quit playing. This is Fletcher Long reporting for Kentucky Prep Gridiron reminding you to PLAY THROUGH THE WHISTLE!