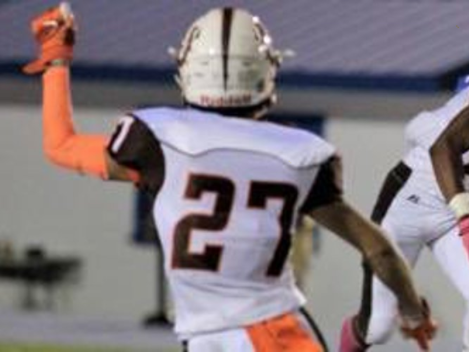 Lance Weiter is just a football player. Anyone who has ever watched Saint Francis DeSales High School play football would concede that fact.

He may not be as tall or as long as people recruiting the position would like, but that should never take away from the fact he is the best defensive back on the DeSales’ roster. After all, DeSales is a team perennially in the state championship hunt in Kentucky’s tough 3A classification.

Last year in 2019, DeSales dropped a heat-breaker in the semi-finals 15-14 to the classification’s Kentucky football championship. Matter of fact, DeSales was the only semi-finalist to lose playing at home. Belfry is tough anywhere you happen to play them.

DeSales was 10-4 in 2019. They also were among the classification’s highest RPIs by year’s end, not an easy feat with 3-regular season “Ls.” This should be surprising to exactly no-one. What does one expect to happen to a 3A team’s RPI when it plays and beats 6A teams the likes of Louisville Butler, and 4A teams the likes of Mercer County?

We would tell you DeSales figures to be tough in 2020. Truthfully, we can’t think of a season since we have covered high school football where the Colts weren’t forecast to be tough. This year is no different. The Colts are preseason ranked the 3rd best team in its classification and the commonwealth’s 22nd best team Kentucky-wide.

Weiter specialized in making plays on the defense’s back-end in 2019. The “little corner who could” had 48-tackles, which is quite a few, even in 14-games played on a defense’s third-level.

More importantly, and why the Colts have him stationed in level-3, Weiter picked-off 4-passes, taking one to pay-dirt, to lead the defense. Weiter also forced a pair of fumbles. Any third-level defender who can gain for me 6-possessions, and even house one of his interceptions, can play corner for me anytime.

Look for Weiter to shine in the defensive secondary in 2020. Look for him to garner considerable recruiting attention as the year goes along as well.