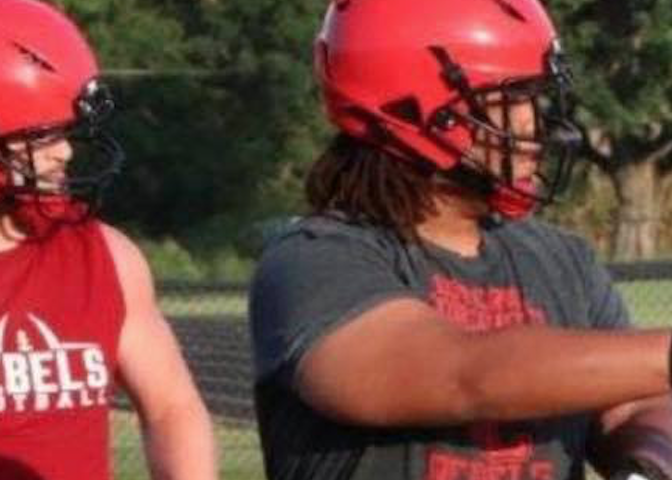 When you are a lineman playing football below the 4A classification in Kentucky, the chances are you are going play both ways. At the 2A level, which is where Todd County Central competes, that is even truer. Thank goodness teams like Todd County Central can develop talent like Damarcus Leavell.

Leavell is a kid on whom we have spilt ink previously. He is listed at 6-0 and 290-pounds. We don’t question the 290, but he looks taller to us than 6-0. Not terribly taller, but some.

He has been playing offensive and defensive tackle for the Rebels. Offense is where his play has “stood out” and where most schools, recruiting him, see him at the next level.

Leavell is drawing considerable interest from schools like Lyon College, Point University, Thomas More, Carthage College, and Richland (VA) along with a slew of others. All of the scouts we have consulted believe he is an interior OL in college.

Last year, the Rebel ground forces gained 3,130-yards rushing in 11-games on 358-carries from scrimmage. They scored 30-rushing TDs in route to over 30-points a night scoring.

For the mathematicians amongst us, that means the Rebels gained an average of 284.5 yards per contest and scored close to 3-rushing TDs per outing. That is pounding the ground, especially in the same district with a McLean County team which won the district and played Somerset in the Regional title game, traditionally tough Owensboro Catholic, and a Hancock County team which has some of the best young, backfield talent in 2A.

Now Todd County threw the football, in 2019, for a little over 1,000 yards and surrendered to opponents over 1,700-yards passing. From a statistical standpoint what needs to improve to take the next step for the Rebels sort of jumps out at the remotely curious.

If Todd County can work on a more credible and consistent air-attack, mixed in with what they really do well, which is pound the rock, they stand the chance to be even better on offense this coming season. Where the Rebels can really improve, to take the next step, is defensively.

In 2019, the Rebels scored 340 points in 11 games. That is pretty potent. However, they surrendered 339-points. That is way too porous for the Rebels to legitimately contend in any district.

Looking around their district, the Calpreps.com computer, preseason, has McLean winning the district with Owensboro Catholic and Hancock County all picked to finish ahead of the Rebels. That leaves Butler County as the only team, in district, picked to finish behind Todd County Central.

We disagree. We think the Rebels will be a much tougher “out” than that preseason prognostication. They have too many good players to finish 4th in a 5-team district. Perhaps, most importantly, they have Damarcus Leavell.