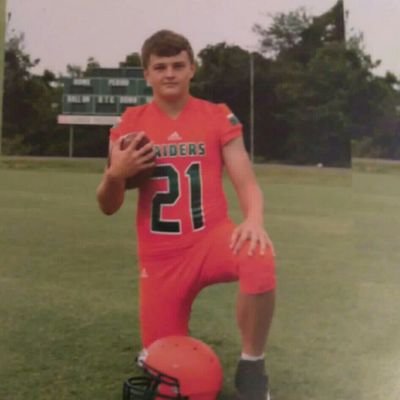 We generally don’t feature outgoing seniors this close to graduation. This magazine covers high school football players and the ’21s are close to not counting amongst that legion.

However, we are doing this feature today for two basic reasons. Under the Academic Re-Do bill we don’t quite know who’s really going and who is staying and because this kid is a good example of there being stars on any and every roster, regardless of how the team performs.

We don’t mean this to be a shot at Hart County High School. The Raiders were 1-4 in ’20, nobody need tell them the performance wasn’t what was wanted or even expected heading into the season.

The Raiders are just a couple years removed from finishing 7-4. No body around Munfordville, Kentucky will relate last year’s worksheet elated any of the hometown faithful.

That said, Dustin Butler is a really good football player. He’s worked really hard both in football and track for his hometown high school.

We think he would make a dandy, late add to a college roster for the ’21 season or greatly improve the high school’s prospects should he return and reclassify next season. This is all provided Butler is aged appropriately to return and the school board permits his return.

Butler led the Raiders in a COVID-19 shortened season in rushing yards while finishing third in rushing TDs, receptions, and scoring. That is fine offensive production as Butler averaged over 100-yards per game rushing and more than 8-yards per carry.

Defensively, Butler’s performance was equally impressive. He led the team in fumble recoveries, was third in total stops, and tied for second in TFLs.

Butler played RB, S, KR (Kick-Returner), and LB making him the most versatile spoke in the Raiders’ wheel last season. That would be difficult to replace if forced to do it.

He is 6-0, 200-pounds. He bench presses 270-pounds and back-squats a cool 450. His registered 4.58-second, forty-yard dash time fits with his lifting numbers and his performance for the high school track team.

Probably among his most impressive numbers are the following: 3.9 GPA, 24-ACT. As we have seen, those of you who follow recruiting through this site, scores like those open plenty of options for athletes to play in college on both “academic” as well as “athletic” money.

Now, we can’t profess to know whether Butler has any interest in moving on or coming back on a “Re-Do.” We can tell you this, if this prospect has been overlooked (and we have just discovered him), and if he does come back, we would be thrilled if this feature here opened some eyes to this prime-time, high school, football star.