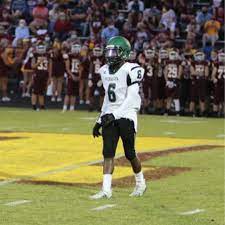 We are developing a common theme. Many of the future stars of the Kentucky High School game are very good at more than just the one sport. Today’s feature is no exception.

Hayes is electric, that is probably the best way to put it. We have linked his highlights for you, take a look for yourself.

Hayes is dependable. His defensive play demonstrates this well. He was among the leaders in tackles. That is not too shabby for a DB. We don’t want them making too many tackles anyway.

Hayes is exciting on the field. He was a star in the return game in the Fall of ’20. This is a critical phase of the game, the special teams.

This “3rd-phase” often gets overlooked. It can (and often does) either win or lose ballgames for a team as quickly as either of the other two phases.

Hayes housed both a punt and a kick-return for TDs in ’20. Not too many kids can say something like that not named Baron Wells from Caldwell County. Wells was another favorite of ours whose game play reminds us eerily of Hayes’.

The two have similar skills. Wells is a ’21, so he’s out of eligibility.

Hayes is fast. Watch his film. That is why we linked it.

Notice how easily he runs through angles. Watch how he is able to separate from 4A, third level guys. Watch how quickly he explodes and gains ground in the return game.

We don’t have any times for you, but we don’t need a stop watch to notice speed. Speed is one of those things which we can instinctively judge accurately. That is why we are permitted to testify in court to the estimated speed of a passing motorist. Because we can…

Louis Hayes is a name you will be hearing much more of in ’21. He will be entering his junior year, unless he takes a “Re-Do,” and that is the year most of the stars really emerge and take giant leaps toward being college players. He will too.

Yessir, this kid is ready to “Break-out.” Now, get out of the way and watch him burn.