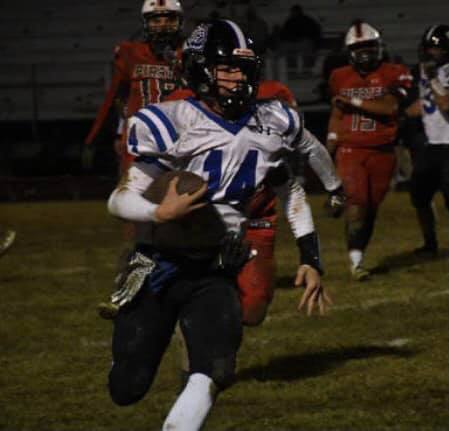 I was walking the midway of a county fair once and came across a guy playing multiple instruments at once, and singing. I thought this guy was mighty talented.

He played a stringed instrument, a harmonica, and some sort of percussion all simultaneously. He also sang along with the self-accompaniment.

He sang very well. Really could deliver a song. How this guy didn’t have a major record deal was beyond me.

Did I mention he was playing the midway at the county fair? We don’t always properly appreciate those guys who can do most everything well.

Ashton Adams is one of those guys. They appreciate him plenty in the Royals football program but some of us around Kentucky who cover football have been lax in giving him his props.

Adams plied himself in all three-phases of football in 2020. He enters his senior season, in ’21, one of the commonwealth’s more versatile performers.

Ashton, a former Team Kentucky Future Star, is 5-11 and weighs a solidly put-together 190. His academics are equally well “put-together,” as he boasts a 4.2 GPA.

He was third on his team in ’20 in yards rushing from scrimmage, scoring, and made 76.2% of his attempted points after touchdown. He also punted; booming one 50-yards against Harrison County. We have linked that effort for you to witness. You don’t have to take our word for it.

Ashton also performed well defensively in ’20. Adams was second on the team in fumble recoveries, fifth in total tackles, and tied for the lead in interceptions.

He must have seemed like a “one-man-band” to opponents scouting the Royals  before having to play the Class 3A, 6th-District stalwart. Makes you wish he had played in more than 7-games last year, a year shortened by the COVID-19 pandemic.

We can’t wait to see what he can do over the course of an entire season. It should be quite the sight to see.

As you would expect, the kid is a multi-sport athlete. He also is a member of the varsity track team, running both the 55 and 60-meter sprints.

Remember, track times are all timed by laser. Laser-times are often quite a bit slower than hand-held times registered by mom or dad in the back yard.

What is interesting about his tack times and how they convert to 40s is, if you work the formula for each, Adams’ 55-meter time of 7.65-seconds compares interestingly with his personal best at 60-meters, 8.24-seconds. Instead of slowing down as he goes along, he gets faster.

Football scouts refer to that as “back-end acceleration or speed,” It is also referenced as “separation speed,” or that’s what the scouts like to call it.

There are lots of programs which covet “utility guys,” or guys who have the athleticism to contribute effectively in multiple phases of football. We have featured guys like Adams before now.

If you are looking for a ’21 prospect similar to which to compare Adams, you might think of Breathitt County’s Lane Weddle. Weddle is a three-phase guy for the Bobcats and also a varsity baseball star. He’s been offered to play in college in both sports, baseball and football.