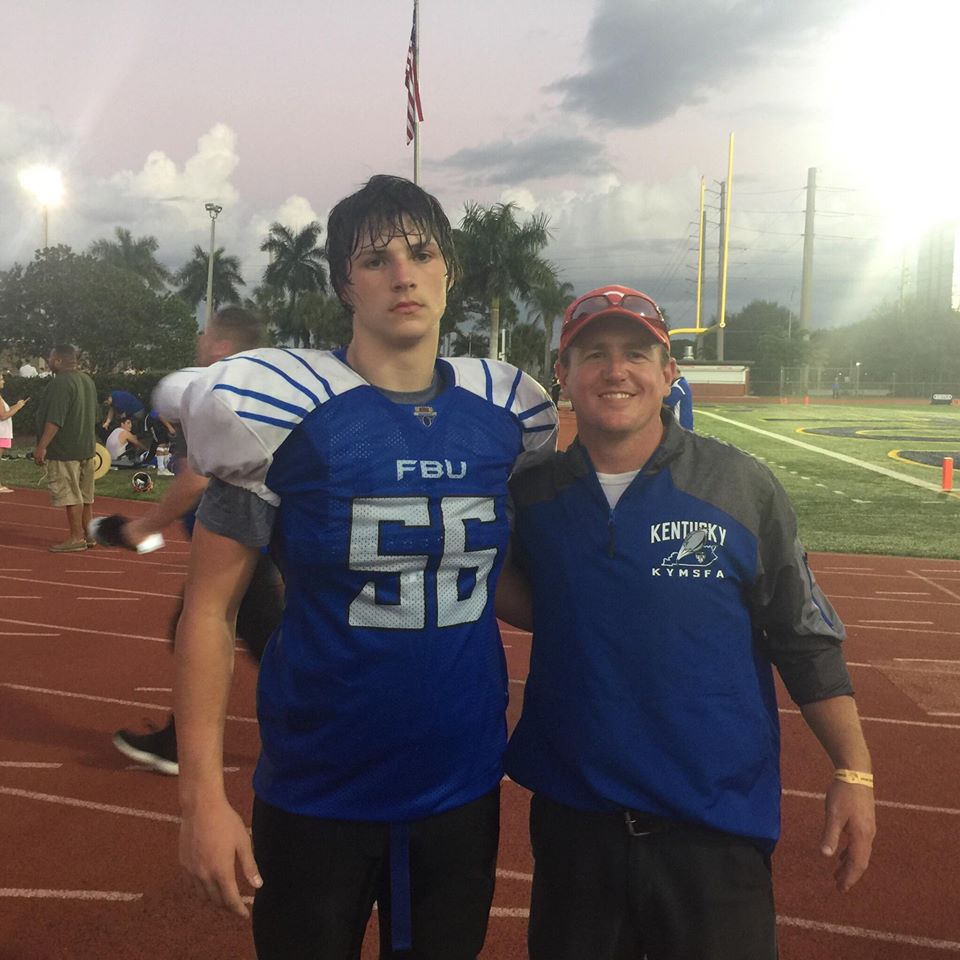 Have any of you ever been to Lawrenceburg, Kentucky? Lawrenceburg is the county seat of Anderson County which, at the taking of the last Census, had a population in the neighborhood of 21,000 or so people. Kentucky Prep Gridiron can assure you of one thing…there are a lot of schools planning trips there to see Darion Dearinger.

Darion is a 6’3″ 215 pounder who played Offensive Tackle on Offense and Defensive End on Defense for Anderson County Middle School. Anderson County completed its regular season undefeated, won its conference, before bowing out of the Regional Finals to eventual Division I, State Champion Newburg Middle School.

Darion, who runs the 40 in 4.9 seconds, bench presses more than 200 pounds already, and deadlifts in the neighborhood of 375 pounds, even though he just started a lifting regimen this Spring, is both fast and naturally explosive and strong. Darion is a two-time selection for both Team Kentucky in FBU and Team Kentucky Future Stars, starting for both squads, both years. Darion was selected a Middle School All-American (FBU), was the MVP of the Central Kentucky prospect camp, and has been invited to the National Underclassman Combine All-American Game. For his Middle School, Dearinger played OT and DE but is projected to play at LB and TE in High School. I have to say, as an Offensive Line Coach, Dearinger has the type of strength, power, violent hands, length and frame to which quite a bit of weight can be added to be one whale of a LT at some point in his development. On down the line don’t be surprised if college recruiters see the same thing. Left Tackles make a lot of money because they aren’t easy to find!

Darion has the type of length and speed on defense to run sweeps into the boundary or tackle backs in space. Dearinger also has the strength, power and disposition to meet plays in the hole. On offense at TE, Dearinger is sure-handed and tall enough to be a coverage nightmare for either Middle or Outside Linebackers. Darion played Center for his Middle School basketball team which finished 7th in the Commonwealth of Kentucky. Not only does he have excellent feet, a requirement for basketball, but he also has excellent wind, which he will need because he will be playing Iron Man football at Anderson County, if not next year, then sometime.

Darion was the captain of his Middle School Football Team and a 3.8 student who involves himself in FCA, his Church and Vacation Bible School, where he is a teacher. This is important to recruiters too as it demonstrates a financial grant-in-aid offered to Darion is not a considerable risk because he has the ability to succeed academically and he isn’t a candidate for getting into the type of trouble which would cut short an athletic career.

Kentucky Prep Gridiron safely predicts Darion Dearinger is a Saturday player. If you are a college recruiter, it would be wise to get in on him now. Dearinger’s physical gifts, ability and intelligence are football commodities in far more demand then there is supply. Recruiters will find the drive to Lawrenceburg is both pleasant and not too far out of the way. Remember ballers…PLAY THROUGH THE WHISTLE!