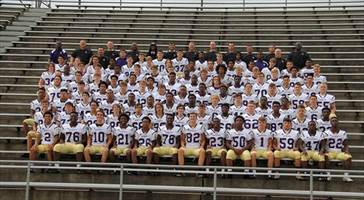 The Purples from Bowling Green High School went 15-0 last year and beat the ever-living Hell out of every team it faced. The only team to stay in the game with them all year was the Christian County Colonels who led the game at half time in the play-offs before succumbing to the Purples 44-29. Oh well, what does one say that wasn’t perhaps best said by an English playwright named John Fletcher who, in 1624 wrote, in a play entitled A Wife for a Month, that March comes in like a lion and goes out like a lamb. During last year’s play-off battle between Christian County and Bowling Green, it wasn’t the month of March coming…in like a lion and [going] out like a lamb. So much for English playwrights. To be fair, beating the Purples for just a half last was an achievement as the Purples beat Pulaski County, from Somerset, Kentucky, in the 5A State Title game 70-20. Talk about your lambs!

Bowling Green High School first began playing football 95 years ago. In that amount of time, BGHS has amassed a 683-330-35 mark. That is averaging more than 7 wins a year over nearly a century. The Purples have won State Championships in

Present HC Kevin Wallace has been at the helm for 5 of the Purples 6 State Championships and has been runner-up an additional three times. Wallace is number one at BGHS in career coaching wins. Coach Wallace, who was on Dan Haley’s staff before ascending to HC, has an overall record of 245-38 since taking the helm from the KHSAA Hall of Famer in 1996. Dan Haley steered the ship from 1984 until BGHS won the program’s first State Championship in 1995. Haley sailed into the sunset with a 119-33 overall slate, a 3-A State Championship (out of 4 divisions) in 1995, a state runner-up in 1994, and 3 regional titles. In fact, to find a HC who had a losing record at Bowling Green High School, one has to go all the way back to Jody Ellis. Coach Ellis took over in 1967 stepping down in 1971 after having gone 21-29 over five seasons. Man, it would stink to be branded the guy who couldn’t win at Bowling Green High School, wouldn’t it?

Bowling Green has won all these games emphasizing team over individual. In fact, it is hard to find a noteworthy former Purple who did very well professionally playing football. Of course, the Purples do have Dale Lindsey, who played for a time professionally and was the Pioneer Football League Coach of the Year in 2014 at San Diego University! I hope my comments aren’t seen as a knock on Coach Lindsey’s playing career. Lindsey after playing on WKU’s undefeated Tangerine Bowl team in college played in the NFL from 1965-1973 at linebacker for the Cleveland Browns (1965-72) and the New Orleans Saints (1973).