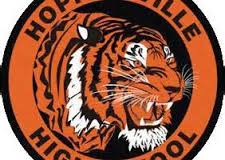 While I am tipping the hat to top High School programs in the Commonwealth of Kentucky, it hardly seems fair that I should omit my Alma Mater, Hopkinsville High School. Hopkinsville High School is the 12th winningest program in KHSAA history, coming in with a career mark of 650-476-33. Coach Fleming Thornton won State Championships in 1965 and 1966, winning 28 consecutive games from 1965 on into the 1967 season. The Tigers have played for the title three additional times (84, 96 & 97).

As before indicated, the KHSAA, which came into existence in 1959, doesn’t recognize State Champions in its official records crowned prior to the 1959 season. If they did, surely Hopkinsville would have been in the running for State Championships in 1940, going 11-0; 1941, beating every Kentucky team it played; 1943, another year the Tigers ran the table and possibly 1944, a year in which Coach Ralph Mills was awarded the Louisville Courier-Journal’s Coach of the Year Award. While we are at it, one has to wonder aloud why few people in Hopkinsville or Kentucky, for that matter, ever extoll the coaching career of Ralph Mills. Mills was hired at HHS in 1937 and retired in 1949, with a stint in the middle of military service. All he did was go undefeated in 1940 (11-0); have to take a train to Atlanta, Georgia to find a team to beat him in 1941; and win the Louisville Courier-Journal‘s State Coach of the Year Award in 1944, finishing the year 9-1 and winning the Western Kentucky Conference.

In an article penned by then Sports Editor of the Kentucky New Era, Joe Wilson, I learned Coach Ralph Mills and the 1940-41 Tigers were led to 22 consecutive wins (the complete win streak was 23 and included a win logged in November of 1939) by half-back Tommy Gray. Gray, whose number has been retired and who was a High School All-American, was known in Kentucky football circles as The Gray Streak in the Bluegrass. I have also learned he was called Terrible Tommy Gray by most of his contemporaries. The Tigers, with Gray at Half-back, finished the 1940 season 11-0, polished off 11 straight opponents in 1941, before finally losing to Boys High School in Atlanta, Georgia. Boys had a High School All-American on its team named Clint Castleberry who attended Georgia Tech and finished 3rd in the 1942 Heisman balloting as a freshman. In 1941, Castleberry led the entire nation in rushing yards from scrimmage averaging in the neighborhood of 170 yards rushing per contest.  The Boys High School team, which ended the Tigers’ 23 game streak, was named National Champions for the 1941 season. Surely, losing to the eventual National Champion in Atlanta, Georgia wouldn’t, necessarily, preclude a team from being State Champion back home in Kentucky?

Coach Craig Clayton, the Silver Fox, took the reigns, in 1986, of a program which had played for the Championship in 1984, and took HHS back to Championship games in 1996 and 1997 before moving to Franklin County, Tennessee after his 16th year at HHS, a span during which he won 162 games on the field of play.  Coach Clayton continued being successful regardless of where he went as he took the 6A Rebels to the Tennessee State Championship game.  Clayton moved from Franklin to Hillsboro and took the Burros to two title games there too. Clayton hasn’t won a title yet but is back at HHS with every intention of righting that wrong. He has brought his 279 coaching victories in both Kentucky and Tennessee with him and looks to add to that number. Having known Coach Clayton for nearly 30 years (since he took the job initially in 1986), I wouldn’t bet against him.

So, on Kentucky Prep Gridiron’s tip of the hat day to elite High School Football programs throughout the Commonwealth of Kentucky, we tip our hat to the Hopkinsville High School Tigers. There is an old Indian (India) proverb along the lines that riding a Tiger isn’t nearly as scary as the dismount. On that note, remember ballers…Hold that Tiger! Oh yeah, while you are at it…PLAY THROUGH THE WHISTLE!